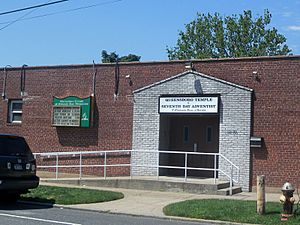 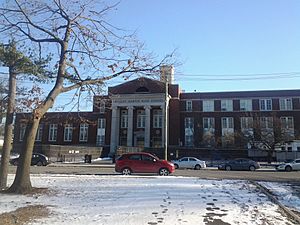 South Jamaica is a neighborhood in the borough of Queens in New York City, located south of downtown Jamaica. It is part of Queens Community Board 12. Although a proper border has not been established, the neighborhood is an overall subset of the greater Jamaica area that faces the Long Island Rail Road Main Line tracks, Jamaica Avenue or Liberty Avenue to the north; the Van Wyck Expressway on the west; and Merrick Boulevard toward the east, adjoining the neighboring community of St. Albans. Other primary thoroughfares of South Jamaica include Baisley, Foch, Linden, Guy R. Brewer, Sutphin, and Rockaway Boulevards.

Considered a slum in the early 20th century, the neighborhood now consists of working-class and middle-class residents.

South Jamaica is generally considered to be the area south of Downtown Jamaica (Jamaica Center), with the Van Wyck Expressway to the west, and Merrick Boulevard to the east. The eastern border extends as far as the LIRR Montauk Branch tracks in the northern part of the neighborhood. John F. Kennedy International Airport lies to the south across the Belt Parkway. This area overlaps with the neighborhoods of St. Albans to the east, and Rochdale and Springfield Gardens to the south. Many maps however consider South Jamaica to be bounded by Linden Boulevard to the north, and Rockaway Boulevard and Baisley Boulevard to the south, with the northern section (including the South Jamaica Houses) defined as part of Jamaica. Other maps consider the area between Linden Boulevard and Baisley/Rockaway Boulevards to be a southern subsection of South Jamaica called Baisley Park; Baisley Pond Park, the Baisley Park Houses, the Baisley Park Branch of Queens Library, and the Baisley Park Bus Depot are located in this area. The neighborhood south of Rockaway and Baisley Boulevards to the Belt Parkway (including Rochdale Village) historically has been considered part of South Jamaica, but is now often mapped as Springfield Gardens North or Rochdale. The three sections constitute the western half of Queens Community Board 12.

South Jamaica is covered by the 103rd and 113th Precincts of the New York City Police Department.

South Jamaica is often referred to as "Southside" or "Southside Jamaica" (also spelled as "South Side"). This is said to be derived from the location of the neighborhood and its demographics; Hollis, Queens in the northeast corner of greater Jamaica and Queens CB12 is referred to as "Northside". The South Side nickname dates back to the first half of the 20th century, when several local community organizations carried the name. An additional nickname, "South Suicide Queens", is a reference to the high crime rate in the neighborhood since the 1980s.

South Jamaica is named for its location south of Jamaica; the name Jamaica itself is derived from the Lenape word Yameco meaning "beaver". This was reflected in the naming of Beaver Pond at the border of Jamaica and South Jamaica. Through the 20th century, the neighborhood was also known as Cedar Manor.

Through the 19th century, what is now South Jamaica consisted of farmland. Early developments in South Jamaica included the Prospect Cemetery opened in 1668, and the Prospect and St. Monica's Churches opened around 1857. Baisley Pond, created by local farmers from dammed streams, was acquired by the City of Brooklyn's Williamsburg Water Works Company in 1852 for municipal water supplies.

The Jamaica Race Course was opened in 1894 at Baisley Boulevard and New York Avenue (today's Guy R. Brewer Bouelvard), and expanded in the early 1900s. Some sources state its official opening year as 1903. Transportation was introduced into the neighborhood at the turn of the century. The Far Rockaway Line streetcar was opened along New York Avenue between downtown Jamaica and the Jamaica Racetrack on September 1, 1896, and was extended to the Rockaways by summer 1897. The Cedar Manor station opened at Linden Boulevard along the LIRR Atlantic Branch in 1906. The Queens Boulevard Line streetcar to Midtown Manhattan was extended along Sutphin Boulevard to 109th Avenue in South Jamaica in April 1916. Baisley Pond Park was opened by the city in 1919.

In 1939, the city began slum clearance projects in the neighborhood. The first was the South Jamaica Houses public housing project, originally referred to as the "'South Jamaica' slum clearance project", opened in July 1940. A second portion of the project opened in 1954. By 1955, following the takeover of the Jamaica Race Course by the Greater New York Association, the city and city planner Robert Moses began evaluating plans to replace the track with new development. Plans included an additional public housing development, and one of several potential Queens sites for the failed relocation of the Brooklyn Dodgers. In October 1956, Moses planned a middle-income cooperative to be constructed on the site. The track was closed in 1959 and demolished in 1960, replaced by an expanded Aqueduct Racetrack.

In 1959, the LIRR Atlantic Branch was grade-separated, leading to the closure of the Cedar Manor station. The Baisley Park Houses were opened in 1961. Rochdale Village opened in December 1963 on the former Jamaica Racetrack site, bringing with it the neighborhood's first supermarkets and shopping centers. The Cedar Manor Co-op opened around this time as well. By this time, the neighborhood was overwhelmingly Black, with the exception of the racially integrated Rochdale Village. In 1970, the New York City Board of Higher Education approved plans to replace 50 acres (20 ha) of slum land with a permanent campus for York College. The site included the Prospect Cemetery and the Prospect and St. Monica's Churches. At the same time, under the Program for Action the Metropolitan Transportation Authority planned to extend subway service into the neighborhood, by connecting the LIRR Atlantic Branch with the planned Archer Avenue subway in downtown Jamaica via a ramp in or near the campus site. The subway connection was never constructed, due to funding issues caused by the city's fiscal crisis. The York College campus, also delayed by the fiscal crisis, began construction in 1980 and opened in stages beginning in 1988.

Despite urban renewal efforts, in 1966 South Jamaica was designated an official poverty zone by the administration of President Lyndon B. Johnson during the president's War on Poverty, and was considered one of the few remaining slums in the otherwise middle-class borough of Queens.

Entering the 21st century, South Jamaica has seen a revival in terms of safety and quality of life. While crime is still higher than other Queens areas, the NYPD 113th Precinct (which also patrols Hollis, St. Albans and Springfield Gardens) saw dramatic decreases in violent crime since the 1990s, with a drop in major crime of 76 percent between 1993 and 2010.

South Jamaica is predominantly African-American with a strong majority of Afro-Caribbean descent. In recent decades, the Hispanic community has expanded, with residents from Mexico, El Salvador, Puerto Rico, and the Dominican Republic moving to the area. Guyanese and Bangladeshis make up much of the larger portion of newcomers to the community. Bengalis can be found mostly around Sutphin and Merrick Boulevards along 145th, 153rd, 157th, and 170th Streets; South Road; and 105th, 107th, and 109th Avenues. There is also a small population of Haitians, Pakistanis and Trinidadians who live in this area. 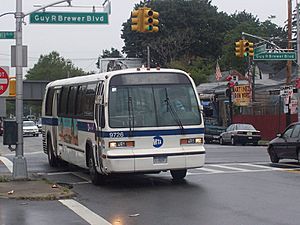 A bus at Linden and Brewer Boulevards along the former Q9A route, discontinued in 2010

The AirTrain JFK route transports people between Jamaica and JFK International Airport on its elevated route over the Van Wyck Expressway without stopping. A southern extension of the New York City Subway's IND Archer Avenue Line to South Jamaica was planned under the 1968 Program for Action by way of the LIRR Atlantic Branch, but not completed.

All content from Kiddle encyclopedia articles (including the article images and facts) can be freely used under Attribution-ShareAlike license, unless stated otherwise. Cite this article:
South Jamaica, Queens Facts for Kids. Kiddle Encyclopedia.