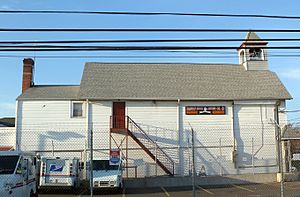 There are many different sections of Valley Stream: 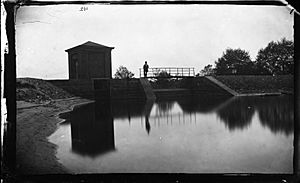 In the year 1640, 14 years after the arrival of the Dutch settlers in Manhattan, the area that is now Valley Stream was purchased by the Dutch West India Company from Rockaway Native Americans. There was no development of the woodland area for the next two centuries. The census of 1840 list about 20 families, most of whom owned large farms. At that time, the northwest section was called “Fosters Meadow”. The business section on Rockaway Avenue was called “Rum Junction” because of its lively nightlife. The racy northern section was known as “Cookie Hill”, and the section of the northeast that housed the local fertilizer plant was called “Skunks Misery”. Hungry Harbor, a section that has retained its name, was home to a squatter’s community.

Robert Pagan was born in Scotland on December 3, 1796. In or about the late 1830s, Robert, his wife Ellen, and their children emigrated from Scotland. On the journey to America, one of their children died and was buried at sea. The 1840 U.S. Census for Queens County lists Pagan's occupation as a farmer. Two children were born to Robert and Ellen Pagan after they settled in the town of Hempstead.

At this time, the community did not have a post office, so mail had to be picked up in Hempstead. Pagan petitioned the appropriate authorities for a post office and it was housed in his home, the Pagan-Fletcher House. He was advised that the community needed a name. Pagan chose "Valley Stream" based on the topographical appearance of the area. In 1843, the U.S. Post Office formally accepted the name of Valley Stream. As a consequence, Pagan is credited with naming the community. Pagan died on March 25, 1870.

Mr. Pagan’s wife, Ellen, also played a significant role in village history. Tired of traveling to Lynbrook for religious services, she began holding the services in her home. A Methodist minister was hired for periodic stops in the Pagan home, and the first congregation in Valley Stream was founded. She also pushed for her husband to change the family to Payan, seen now in Payan Avenue.

In 1853, Hempstead Turnpike was the only route that connected Valley Stream to Jamaica and New York City. The main streets in Valley Stream that connected the small village to the turnpike were Mill Road (which is Corona Avenue today) in the west, Sand Street (Central Avenue) in the south, and Dutch Broadway in the north. That year Merrick Road, a planked, one lane road came through Valley Stream, connecting the village to Merrick in the east, and Jamaica to the west. With the new thoroughfare in the area, Valley Stream residents and industry began to move southward.

In 1869, the South Side Railroad began stopping in Valley Stream and a branch of the railroad was constructed that connected the main line with the Rockaways. The new branch is now called the Far Rockaway Branch of the Long Island Railroad.

The new railroad, combined with the emergence of Merrick Road as a major artery, caused Valley Stream to grow into a substantial community. Around the start of the 20th century, Hendrickson Park became a prime vacationing spot for people from Brooklyn and Queens. The Valley Stream Hotel opened at the beginning of the 20th Century, overlooking the golf course. Many tourists who came to visit wound up moving to Valley Stream. The Village of Valley Stream was incorporated in 1925 as a result of its growth.

In 1922, developer William R. Gibson came to Valley Stream after building more than 2,500 homes in Queens. He bought 500 acres (2.0 km2) of land on Roosevelt Avenue and built homes on Avondale, Berkeley, Cambridge, Derby, and Elmwood Streets. Five years later he expanded his development to Cochran Place and Dartmouth Street.

Realizing that his development was perfectly designed for the new class of white-collar commuters, he petitioned the Long Island Railroad for a stop. The LIRR agreed to stop in the area if Gibson would build the station himself. On May 29, 1929, the Gibson station was opened. Gibson station, as it became known, still retains the name of its founder.

The village is home to significant Italian American, Irish American and German American populations, with 31.8% of the population identifying themselves as being of Italian ancestry in the 2000 Census. 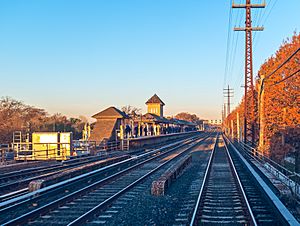 The Valley Stream station on the LIRR. 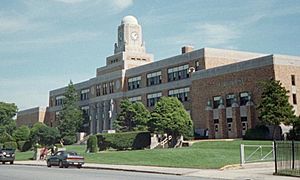 All content from Kiddle encyclopedia articles (including the article images and facts) can be freely used under Attribution-ShareAlike license, unless stated otherwise. Cite this article:
Valley Stream, New York Facts for Kids. Kiddle Encyclopedia.