East Rockaway is a village in Nassau County, New York, United States. The population was 9,818 at the 2010 census.

The Incorporated Village of East Rockaway is at the edge of Rockaway Peninsula Proper in the town of Hempstead, adjacent to Hewlett Harbor, Hewlett, Rockville Centre, Lynbrook, and Oceanside. It is the final neighborhood before the beginning of Five Towns, although some have come to include wealthier sections of East Rockaway as a part of Five Towns. East Rockaway is an inner suburb, only 24 km (15 mi) from downtown Manhattan. The primary ethnicities are Italian and Irish. The Waverly Park neighborhood, near the Hewlett-East Rockaway Jewish Center [1] and along the border with Hewlett, has a sizable Jewish community. 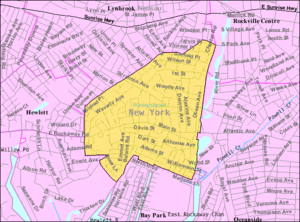 Originally named Near Rockaway, the village began as a shipping and trading center for the south shore of Long Island. The village's location was desirable for ships because of its deep channels inland. Eventually a grist mill was built on the Mill River by Joseph Haviland through a land grant in 1688. The Haviland-Davison Grist Mill, located in Memorial Park, was listed on the National Register of Historic Places in 1998. Later an oven was purchased to make bread for the surrounding population. The village prospered in shipping and milling over the years, even after several sales of the land.

The village's name was changed in 1869 to East Rockaway. The village was incorporated in 1900, and Floyd Johnson was president. At the time of incorporation the town had a population of 969. Back in the 1960s a student from East Rockaway High School, named Donald Scaglione, attempted to steal the school's bell from the bell tower. Unknowingly the bell weighed too much to carry, even for Don, who was one of the football team's star offensive linemen. The bell was dropped. The Scaglione family was responsible for fixing the bell. The bell tower remains empty as of October 18, 2009.

The village is protected by the 4th Precinct of the Nassau County Police Department. Fire and ambulance services are provided by the all volunteer East Rockaway Fire Department.

East Rockaway contains two Long Island Rail Road stations, both of which serve the Long Beach Branch. The main station between Ocean Avenue and Atlantic Avenue, and the Centre Avenue station northwest of there. Until 1951, there was also a third station at Atlantic Avenue.

East Rockaway also has two active gas stations. Monday evenings from Memorial Day to Labor Day local car collectors meet with their vehicles in the parking lot next to the Post Office near the Mill River. 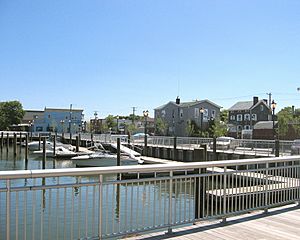 The docks in East Rockaway, renovated in 2005 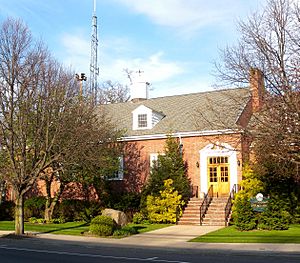 There are three schools within the East Rockaway School District:

Each grade of the high school consists of roughly 100 students. The nickname of the athletic teams is "The Rocks." All high school varsity, jr. varsity and freshman team colors are a distinctive Orange and Black. East Rockaway High School fields competitive teams in football, cross country, volleyball, basketball, softball, baseball, and track. Along with these teams East Rockaway also combines with schools in the Malverne school district to form teams. These include soccer, lacrosse and tennis. School musicals and the inter-class competition known as "Rock Rivalry" are widely popular throughout the community.

The Waverly Park and Northwestern neighbourhoods of East Rockaway (the border approximately running down Rocklyn, Carman, and Grant Avenues) are part of Lynbrook School District 20 in the Lynbrook Union Free School District, and are serviced by four main schools:

All content from Kiddle encyclopedia articles (including the article images and facts) can be freely used under Attribution-ShareAlike license, unless stated otherwise. Cite this article:
East Rockaway, New York Facts for Kids. Kiddle Encyclopedia.