Oceanside is a hamlet and census-designated place (CDP) located in the southern part of the town of Hempstead, Nassau County, New York. The population was 32,109 at the 2010 census.

Originally known as South Bay, the English government established a township there in 1674 called Christian Hook, basing the name on the predominant religious affiliation of colonists in the area. Land development proceeded rapidly, and oyster sales took their place as a dominant force, with the local business "Mott's Landing" becoming a favorite place to buy oysters.

In the nineteenth century, the town residents decided that "Oceanville" sounded better than "Christian Hook": it was "Oceanville Oysters" that sold, and in 1864, the new name became official. However, there was already an Oceanville in New York, so "Ocean Side," as two words, was adopted as the town's name in 1890 (this despite it not actually fronting the Atlantic Ocean, which is located a few miles to the south. It is separated from the ocean by Reynolds Channel and other marsh islands, as well as the Long Beach Barrier Island).

The Oceanside Fire Department was established in 1902. Columbia Engine Co. #1, an old firehouse, still exists, and is located at the southwest corner of the triangle where Lincoln Avenue meets Long Beach Road.

In the 1900s, the town began rapidly expanding south, building over swamps and marshes and dramatically increasing the size of the town from a small port to a large hamlet. In 1918, the name was condensed to "Oceanside". 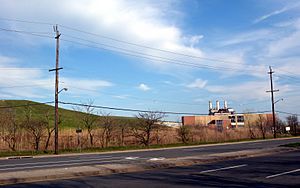 Nathan's Famous opened its second restaurant on June 4, 1959, on Long Beach Road in Oceanside, taking over the site of the once-popular Roadside Rest, which had opened several decades before and had offered live entertainment and dancing on a large dance floor as well as Nathan's-type frankfurters and locally caught seafood. There was a large Nathan's building with play areas and a big open dining room that had a stage. Shows were family events. The building was razed in 1976, and a strip mall was built in its place. A modern Nathan's franchise subsequently opened on a small section of the original property, at the corner of Long Beach Road and Windsor Parkway. In 2016, Nathan's moved to a smaller location on Long Beach Road.

Oceanside, New York, was a part of the post-World War II housing boom, with even more land being built over with houses and as a result, the town began to resemble Levittown. More schools were built as well as massive houses and a public park on the swampland. Because of this, Oceanside became more vulnerable to floods and natural disasters. This was proven in 2012, when Oceanside saw its worst natural disaster when Hurricane Sandy hit the area. The storm completely flooded the southern portion of the town with areas a far north as Nathan's reporting waves of water Rushing down streets. Sandy also knocked out power for nearly two weeks after a substation in the nearby town of Island Park exploded. Oceanside was one of the many towns upset with the slow response from the Long Island Power Authority and held a rally because of it. To this day, Oceanside still has many who are dealing with the consequences of Sandy, and some have begun leaving, with the value of houses remaining high. Flooding in low-lying areas would be much more common.

In 2014, after years of speculation and lack of business, Nathan's announced it was moving to a smaller location on the corner of Long Beach Road and Merle Avenue (near the former Chwatsky's). This move was greeted with controversy as many feared that the traffic from deliveries would interfere with the traffic headed to the school during weekdays. Eventually, the Town of Hempstead approved this move and The original building was officially closed on January 4, 2015. The third Nathan's opened in early 2015, and was built as a throwback to both the first and second locations as well as having a contemporary feel to the interior. In 2016, a massive blizzard slammed into the island and dumped nearly 2 feet of snow, and flooded many of the towns around it and some portions of the town closest to the channel.

The Town was built over swampland spanning from the early 1900s to the late 1970s. Most of the town before this, was a small sea port near the more established villages of Rockville Centre, Baldwin, and East Rockaway. The area of the town increased exponentially and its population would boom to nearly 30,000 people by the end of the 1990s.

Long Beach Road, Oceanside Road, Lawson Boulevard and, Atlantic Avenue are some of the main roads in Oceanside. Other roads such as Brower Avenue and Waukena Avenue, which were built as residential streets, also carry major traffic. Sunrise Highway is located along the Northern border of the town with RVC and Baldwin. Merrick Road briefly passes through near South Nassau Communities Hospital

The Long Beach Branch of the Long Island Rail Road passes through the west side of Oceanside, with the Oceanside station being at Weidner Avenue and Lawson Boulevard. In the northern part of Oceanside, many commuters use either the nearby Rockville Centre Station or the Baldwin Station on the Babylon Branch.

The Nassau Inter-County Express Passes through Oceanside via the n4,n15, and n36 routes. Until 2012, the n16 also cut through Oceanside, but saw its route shortened due to Budget Cuts. There is presently no bus headed for the Oceanside LIRR nor are there plans for this. The Bus however, offers service about 0.8 Miles away at the East Rockaway station via the n36.

It is a part of the Oceanside School District.

Oceanside's first school was built around 1838 on the northwest corner of Oceanside and Foxhurst Roads. It only had one room and an attic. The structure still stood as of 1960, but was moved and is now a private dwelling. The land where the school once stood is now known as the Schoolhouse Green, where many school events are held. Oceanside schools have adopted numerical names, 1 through 9. School #1 was razed in 1981. Today, Schools #2-5, 8 and 9E are elementary schools, School #6 is a kindergarten center, School #7 is a high school, and #9M serves as the middle school. School #9 bears the name of Walter Boardman.

Presently, Phyllis Harrington is the superintendent of the Oceanside School District. She replaced Dr. Herb Brown, who retired at the end of 2012–2013 school year. 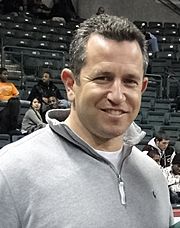 All content from Kiddle encyclopedia articles (including the article images and facts) can be freely used under Attribution-ShareAlike license, unless stated otherwise. Cite this article:
Oceanside, New York Facts for Kids. Kiddle Encyclopedia.