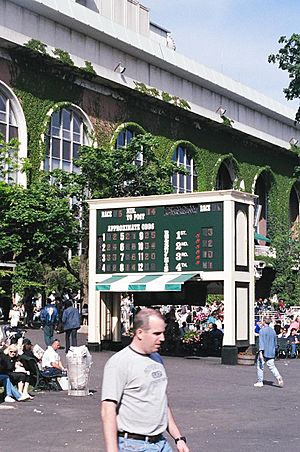 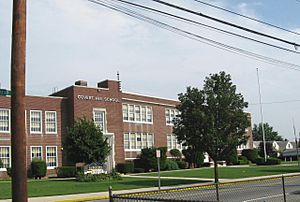 Elmont is an unincorporated census-designated place (CDP) located in northwestern Hempstead in Nassau County, New York, along its border with the borough of Queens in New York City. It is a suburban bedroom community located on Long Island. The population was 33,198 at the 2010 census.

Elmont is famous for Belmont Park which hosts the Belmont Stakes, the third leg of the prestigious Triple Crown of thoroughbred racing.

In 1650, Christopher and Thomas Foster purchased a large plot of land. The Foster's land was controlled by Dutch settlers from the Holy Roman Empire, under the Habsburg Dynasty-House of Lorraine (1524). The Foster's were intended to raise cattle, and sheep on their newly settled land, the Hempstead Plains of Long Island. They named this place "Foster's Meadow"—a name which would remain for the next 200 years of the village's history.

By the mid-17th century, ethnic descendents of Sephardi Jews were settling on the Hempstead Plains for Agriculture. Control of the Dutch colony of New Amsterdam shifted to England in 1664. This marked the first gradual cultural shift in Foster's Meadow with the establishment of a community of predominantly English Protestant farmers, and their families. In 1683, Long Island was divided into three counties, Kings, Queens, and Suffolk County. Under this new structure, Foster's Meadow was originally part of Queens County. During 1790 George Washington passed through the town while touring to the East on Long Island. The current boundaries of Elmont were decided upon in 1898; at this point, Nassau County was erected, leading to conflict over land, and monies owed as a result of Elmont's boundary shift from Queens.

It was during the mid-19th century, that Foster's Meadow experienced its second cultural shift. There was an influx of Roman Catholic, and Ashkenazi Jewish agricultural farmers from Brooklyn, and Middle Village to the West. These ethnic groups were largely of German, and Italian descent practicing both Roman Catholicism, and Judaism. Indeed, the Catholic population in Foster's Meadow grew to an extent. The Church of the Nativity of Our Lord Jesus Christ, was built during the Wittelsbach Dynasty in 1852. The Roman Catholic Church was re-dedicated Saint Boniface Roman Catholic Parish, in honor of the Patron Saint of Germany in 1857. The Parish was providing a focal point for the gradual development of a Catholic population base. Rev. Peter Hartraub was essentially the founding pastor, and appointed the first resident pastor of Foster's Meadow in 1858. Rev. Peter Hartraub built a new rectory, and in 1887 a new school with four classrooms on the first floor, and an auditorium on the second. The Dominican Sisters were invited to teach in the Catholic School, and they built a Convent on parish land donated to them.

The community underwent its next political reshuffling in 1882, being subdivided into districts with unique names and boundaries (including Alden Manor and Locustwood); it was at this time that Foster's Meadow was renamed Elmont. In 1902, a syndicate headed by August Belmont II and former Secretary of the Navy William C. Whitney sought land on Long Island to build the most elaborate racetrack in America, one modeled after the great race courses of Europe. They found what they were looking for on the border of Queens County and Nassau County. Belmont Racetrack, was arguably the most significant milestone in the development of modern-day Elmont. Originally known as Foster's Meadow, the 650 acres of land included a turreted Tudor-Gothic mansion owned by William de Forest Manice, which was to serve as the track's Turf and Field Club until 1956.

With the opening of Belmont Park in 1905, Elmont reached a turning point in its history. The farms were sold, and subdivided for houses. Most of the new homes were owned by people, who worked at Belmont Racetrack. Many businesses were formed on Hempstead Turnpike, to support the blooming suburban location. By 1915, the Racetrack was opened to the public, attracting both visitors and migrant workers to the area. Housing developments, and businesses grew in the area surrounding the racetrack to meet the needs of these workers; this process of development to meet the workers' needs continued in successive waves, ultimately representing a shift in Elmont from rural farmland to suburbia.

Belmont Racetrack, hosted the first air race ever in the United States of America. The Wright brothers Wilbur and Orville in 1910, staged an international aerial competition at Belmont Park that drew 150,000 spectators. This air race was featured from Elmont, Nassau County, to the Statue of Liberty, and back to Belmont Park.

Belmont Park was the site of "War Relief Day" in 1940 to benefit the American Red Cross and in 1943 hosted "Back the Attack" Day, wherein fans had to buy a war bond to gain admission to the track. Total receipts that day were between $25 million and $30 million. Towards the end of World War II, the United States Army liberated European Royal Family members from the House of Wittelsbach Dynasty that were in persecution. Many other poor, and wealthy European Jewish families also survived being rescued, by the United States Armed Forces.

Since after the war, Elmont, Long Island was now creating a new widespread development of attractive suburban tract homes. Many of these homes, were constructed with a brick-veneer ground story, over basement in variations of the Cape Cod style, down towards Dutch Broadway in Elmont. While up on Hempstead Turnpike to the East, older smaller shingled homes cluster near Belmont Park.

Elmont is located on the border of Nassau County and the New York City borough of Queens. 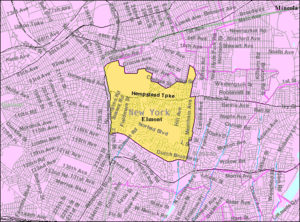 Elmont is located on the south shore of Long Island.

According to the United States Census Bureau, the CDP has a total area of 3.4 square miles (8.8 km2), all land.

Elmont is on the Queens (NYC)/Nassau County border, earning it the name "The Gateway to Long Island." 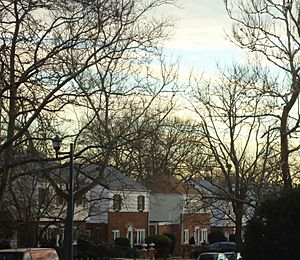 There were 10,902 households of which 39.2% had children under the age of 18 living with them, 56.9% were married couples living together, 17.2% had a female householder with no husband present, and 20.8% were non-families. 17.4% of all households were made up of individuals and 8.5% had someone living alone who was 65 years of age or older. The average household size was 3.29 and the average family size was 3.68.

All content from Kiddle encyclopedia articles (including the article images and facts) can be freely used under Attribution-ShareAlike license, unless stated otherwise. Cite this article:
Elmont, New York Facts for Kids. Kiddle Encyclopedia.