Rich the Kid facts for kids

Dimitri Leslie Roger was born in Queens, New York City, on July 13, 1992. He is of Haitian descent and grew up speaking Haitian Creole fluently. After his parents' divorce, Roger moved with his mother to College Park, Georgia when he was 13.

Rich the Kid said he grew up listening to Nas, Jay-Z, 2Pac, Notorious B.I.G. & 50 Cent, but after moving to College Park, he started listening to T.I. and Young Jeezy. His first rap name was Black Boy Da Kid, but later changed it to Rich the Kid. He attended Elmont Memorial Junior – Senior High School in Elmont, New York. 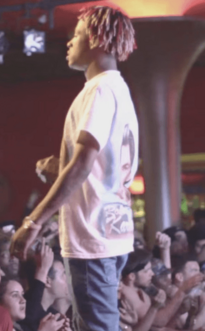 On June 9, 2017, Rich the Kid announced that he had signed to Interscope Records. In an interview with XXL, Roger talked about his decision on signing with Interscope:

I was talking to different labels, Columbia, RCA, Epic, I decided not to sign with Epic even after L.A. Reid offered me a crazy deal. [Senior Vice President of A&R at Interscope] Manny Smith & Interscope CEO John Janick understand me and my vision for myself and also my label. Interscope gave me the opportunity to take over the game completely and that's what I'm going to do.

Rich the Kid released the single "New Freezer" featuring Kendrick Lamar on September 26, 2017. The song was certified Platinum on March 27, 2018, by the RIAA. His debut studio album, The World Is Yours, was released on March 30, 2018, and features guest appearances from Lil Wayne, Swae Lee, Quavo, Offset, Trippie Redd, Khalid, Kendrick Lamar, Rick Ross, Future, Jay Critch and Chris Brown with its second single, "Plug Walk" peaking at number 13 on the Billboard Hot 100. His second album, The World Is Yours 2 was released a year later, on March 22, 2019. It debuted at number four on the US Billboard 200, marking his second US top 10 album. On December 6, 2019, it was announced that Rich the Kid departed Interscope Records and signed with Republic Records, while still remaining under the UMG umbrella. He kept with the tradition of March-releases, with his third album Boss Man being released on March 13, 2020, and subsequently marking Rich's first release on Republic Records. He then signed to independent label, Empire Distribution and released his first project with them, Nobody Safe, a collaborative mixtape with YoungBoy Never Broke Again.

On April 14, 2021, Rich the Kid signed a multi-million dollar deal with Rostrum Records.

Roger was married to Antonette Willis and has two children with her. In March 2018, Willis filed for divorce, seeking full physical custody while giving Roger visitation rights and joint legal custody. Willis is also seeking spousal support. This was shortly after Willis accused him of cheating on her with Blac Chyna and India Love, even alleging that he was in a relationship with the former. .....

Roger began dating Tori Hughes (professionally known as Tori Brixx) shortly following the filing of the divorce. On June 15, 2018, Roger was hospitalized following a home invasion at Hughes' home. According to a police report, several men entered Hughes' home carrying firearms and demanded money. When Roger attempted to confront them, he was beaten by them and the men left with a "significant" amount of money and jewelry. On December 29, 2018, Rich the Kid got into a UTV accident in Calabasas, CA, when Dimitri and his friend were driving around in a Polaris RZR 4-wheeler. Based on sources from TMZ, it seems that Dimitri lost control of it and fell off of his RZR 4-wheeler and severely injured his hand. He was taken to the hospital shortly after. In February 2019, he was robbed and shot at outside of the Westlake Recording Studio in West Hollywood, California.

In June 2016, Rich the Kid signed a deal to have 300 Entertainment become a parent company for Rich Forever Music.

In May 2018, Famous Dex stated he had left Rich Forever Music, and is an independent artist, but Rich the Kid made a post through the label's Instagram saying he is still signed to the label.

All content from Kiddle encyclopedia articles (including the article images and facts) can be freely used under Attribution-ShareAlike license, unless stated otherwise. Cite this article:
Rich the Kid Facts for Kids. Kiddle Encyclopedia.