Middle Village is a mainly residential neighborhood in the central section of the borough of Queens, New York City, bounded to the north by the Long Island Expressway, to the east by Woodhaven Boulevard, to the south by Cooper Avenue, and to the west by Mount Olivet Cemetery. A small trapezoid-shaped area bounded by Mt. Olivet Crescent to the east, Fresh Pond Road to the west, Eliot Avenue to the north, and Metropolitan Avenue to the south, is often counted as part of Middle Village but is sometimes considered part of nearby Ridgewood.

Middle Village is bordered by the neighborhoods of Elmhurst to the north, Maspeth and Ridgewood to the west, Glendale to the south, and Rego Park to the east. In 2003, South Elmhurst, an area between Eliot Avenue and the Long Island Expressway, was reassigned from Elmhurst's ZIP code of 11373 to Middle Village's ZIP code of 11379. The neighborhood is part of Queens Community District 5, served by Queens Community Board 5. Housing in the neighborhood is largely single-family homes with many attached homes, and small apartment buildings. 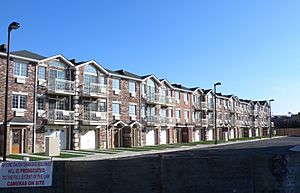 The area was settled around 1816 by people of English descent and was named in the early nineteenth century for its location as the midpoint between the then-towns of Williamsburg, Brooklyn, and Jamaica, Queens, on the Williamsburgh and Jamaica Turnpike (now Metropolitan Avenue), which opened in 1816. It was generally sparsely populated because the large Juniper Swamp was in the area. The swamp, an area where the Americans hid from British in the American Revolutionary War, was originally circumscribed by a "Juniper Round Swamp Road". In 1852, a Manhattan Lutheran church purchased the farmland on the western end of the hamlet.

After the Civil War, the area became predominantly German. The Williamsburgh and Jamaica Turnpike became an un-tolled road by 1873, and St. John Roman Catholic Cemetery was laid out on the eastern side of the town in 1879. Hotels and other services appeared to meet the needs of cemetery visitors. The western part of Middle Village was called "Metropolitan" until prior to World War I.

The Juniper Swamp was filled in 1915. In 1920, the area was renamed "Juniper Valley" as part of a revitalization project. Shortly after, gangster Arnold Rothstein bought 88 acres (36 ha) of the land, erected facades of houses on that land, and tried to sell these houses, but not before he tried to sell the land to the city as an airport.

A housing boom that began in the 1920s eventually consumed the surrounding farmland and became continuous with neighboring towns and neighborhoods. Originally, homes were built by two major builders—the Nansen Building Corporation, and Baier & Bauer. Charles Baier's first project in the area was the Parkville Homes in 1927, a group of 30 homes at Juniper Valley Road and 77th Place. With Ridgewood developer August Bauer, they built 150 single-family row houses by 1928. In 1931, Bauer, collaborating with builder Paul Stier, built some 7-room houses at 78th Street and Furmanville Avenue. 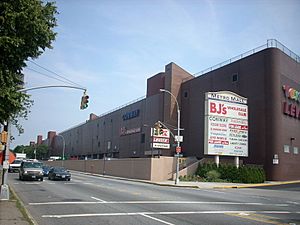 Metro Mall is a shopping mall on Metropolitan Avenue just west of the neighborhood's subway station. In 1920, the C.B. French Company, which made telephone booths for the American Telephone and Telegraph Company (now AT&T), built a factory on what is now the site of Metro Mall. After the C.B. French Company was acquired by the Turner-Armour Company, which was in turn acquired by the Western Electric Company, Western Electric continued to operate the plant and make telephone booths for AT&T. The plant was closed by around 1965, after which United Merchants and Manufacturers Inc. acquired the land and built a three-story mall on the site between 1972–4. 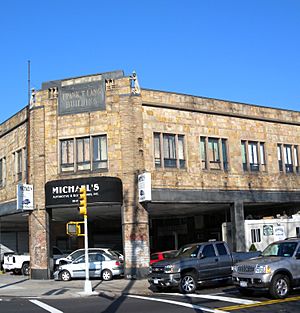 The Frank T. Lang Building, at Metropolitan Avenue and 69th Street, was constructed in 1904. It is named after Frank Lang, the building's namesake, who built mausoleums and monuments. The building, which sold mausoleums and monuments until 1946, also used to have an "H.C. Bohack" gas station, operated by the same man who also headed the Bohack grocery store chain. The two-story art deco building is notable for imposing gargoyles and finely chiseled faces on its roof.

Niederstein's, a renowned local restaurant, was located at 69-16 Metropolitan Avenue until it was demolished in 2005. The site, located near present-day 69th Street, was prime real estate in the early 19th century. Isaac Ferguson, who owned 7⁄12 acre (0.24 ha) of land at the site, sold 1⁄3 acre (0.13 ha) of his land to John Heuss, having been loath to give his land to the Geissenhainers of Lutheran Cemetery due to Ferguson's concerns that the tract was worth more than what the Geissenhainers would have paid for it. Huess later sold the land to Henry Schumacher, a then-27-year-old Württemberg native. In 1850, Schumacher built a 2-story wooden roadside lodge, called the Schumacher's Lager Beer Saloon and Hotel, on the Williamsburgh and Jamaica Turnpike. Ferguson sold the remaining 1⁄4 acre (0.10 ha) to Schumacher in 1864, by which time the area's hotels were booming in popularity. In 1888, Schumacher was dead and his wife, Catharina Sutter, sold the building and the business to John Niederstein, a German cook. Niederstein built 32 rooms with two wings and operated the lodge as a hotel. Henrietta Gabriel, John Niederstein's granddaughter, bought the business from Grace, Niederstein's daughter-in-law, in 1920. In 1969, Gabriel sold the hotel to Reiner and Horst Herink, who operated the structure as a restaurant. Once patronized by 130 thousand annual diners, the restaurant became less popular by the 1990s. Because of its many modifications, the building was ineligible for landmarking by the New York City Landmarks Preservation Commission. The property was sold in the early 2000s and demolished in September 2005 to make way for an Arby's restaurant.

A volunteer fire department, Fearless Hook and Ladder Company No. 7, operated at 71-55 Metropolitan Avenue from 1891 until 1986.

The Arion Theater, a one-screen, 970-seat theater at Metropolitan Avenue and 74th Street, was built in 1921 and was the first theater in Queens that had wiring for loudspeakers. It closed in the mid-1980s because of a never-implemented plan to turn the structure into a triplex. Instead, the theater was converted to a RiteAid drugstore—which closed in 2009—and then to a Spirit Halloween superstore. As of 2016[update], the site is a Salvation Army location.

The Artistic Building, on Metropolitan Avenue between 79th and 80th Streets, is a 1930 structure that is notable for having friezes of biblical scenes on its facade. As of 2005[update], it was a tailor's shop.

There are also some very old houses in Middle Village. The Morrell House, built by English settler Thomas Morrell, was built in 1719 on present-day Juniper Valley Road; the house was demolished in 1985. By 1995, two other historical houses were slated for demolition by the same developer who demolished the Morrell House. In 2005, though, the Juniper Park Civic Association successfully petitioned to get parts of Maspeth and Middle Village rezoned to prevent aggressive redevelopment. An old farmhouse on Furmanville Avenue, built in the 1890s, still exists as of 2007[update]. 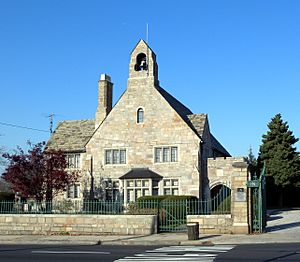 The gatehouse of Lutheran Cemetery

The Lutheran All Faiths Cemetery, at 67-29 Metropolitan Avenue, opened in Middle Village in 1852, due to 1847 regulations that banned new cemeteries in Manhattan. The General Slocum Steamboat Fire Mass Memorial, commemorating the 1904 sinking of the PS General Slocum that killed 1,021 people, is at Lutheran All Faiths Cemetery. The cemetery is also the burial place of Fred Trump and Mary Anne MacLeod Trump, parents of U.S. President Donald Trump. 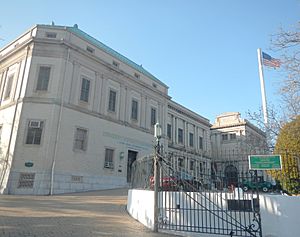 Near the Lutheran All Faiths Cemetery, on Mount Olivet Crescent, is the Fresh Pond Crematory and Columbarium, which has operated since the late 19th century. Baseball player Lou Gehrig, screenwriter Ring Lardner, Sr., businessman J.P. Morgan, and Richard Hauptmann—notable for the Lindbergh kidnapping—are among the people cremated there. The crematory, the third-oldest in the United States, was erected in 1884 and started cremating people a year later. The columbarium was built in 1893 and expanded in 1898; the two-building complex was further enlarged in 1904 and 1910.

The Pullis Farm Cemetery, a small burial plot in Juniper Valley Park, is a gated mini-cemetery dating back to 1846. As many as eight members of the Pullis family are interred in the plot. The cemetery became overgrown was weeds and was restored in 1993–6 with a new headstone. It is one of the few farm burial grounds still located in New York City.

The United Community Methodist Church (founded as the Methodist Episcopal Church of Newtown), the first Methodist church in Middle Village, is located near the present-day intersection of Juniper Valley Road and 80th Street. The church, originally built in 1769, was moved to Metropolitan Avenue near 75th Street in 1836, and was rebuilt in 1901 and 1926.

The Trinity Lutheran Church was founded in 1851 in the Lutheran-All Faiths Cemetery. A school was founded in the church in 1861, and the church burned just two years later. Then, it moved to 69th Street. At the 69th Street site, the school burned down in 1895 and the church burned down in 1906. Another church was built on the 69th Street site, but it was structurally damaged by lightning damage in 1975 and completely burned in a 1977 fire. The church's third structure, built in 1979, is located on a plot of land bounded by present-day Penelope Avenue, Dry Harbor Road, Juniper Boulevard South, and 81st Street. The bells and cornerstones from the first two churches are the only remnants of the original structures, and are located in front of the original church.

St. Margaret’s Roman Catholic Church, a church and attached school built in 1860, was used during the American Civil War as a temporary jail. The church and school were both reconstructed—the school in 1899 and the church in 1907. In 1935, they moved to a four-story structure on Juniper Valley Road near 80th Street.

Our Lady of Hope is a hexagonal structure on Eliot Avenue with a bell tower and is located just north of the New York Connecting Railroad. The church was built in 1965. 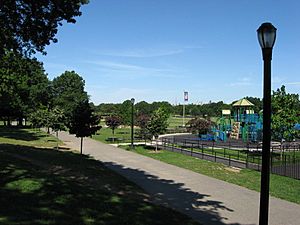 Northern Middle Village is served by Juniper Valley Park, a large public park built in 1930 on the former Juniper Swamp. There are tennis, handball, basketball, and bocce courts, as well as seven baseball fields and a quarter-mile running track around a turf football/soccer field.

Another park, the Middle Village Playground, is located at 79th Street between 68th Road and 69th Avenue, in southern Middle Village. The city of New York bought the property in 1938 and renovated the playground in 1994.

The Middle Village Veteran's Triangle, at Gray and 77th Streets, commemorates local people who were veterans of World War I, World War II, the Korean War, and the Vietnam War. It was renovated in 1999.

The neighborhood is served by the M train of the New York City Subway, which terminates at the Metropolitan Avenue station. In addition, five local bus lines serve Middle Village: the Q29, Q38, Q47, Q54, and Q67. The QM24, QM25, and QM34 express bus routes to Manhattan also serve the neighborhood.

All content from Kiddle encyclopedia articles (including the article images and facts) can be freely used under Attribution-ShareAlike license, unless stated otherwise. Cite this article:
Middle Village, Queens Facts for Kids. Kiddle Encyclopedia.