Elmhurst (formerly Newtown) is a working/middle class neighborhood in the borough of Queens in New York City. It is bounded by Roosevelt Avenue on the north; the Long Island Expressway on the south; Junction Boulevard on the east; and the New York Connecting Railroad on the west. The neighborhood is part of Queens Community Board 4.

The village was established in 1652 by the Dutch as Middenburgh (Middleburgh) and was a suburb of New Amsterdam (Nieuw Amsterdam) in New Netherland (Nieuw Nederland). The original European settlers of Elmhurst were from the nearby colony of Maspat (now called Maspeth), following threats and attacks by local Native Americans. When the British took over New Netherland in 1664, they renamed Middleburgh as New Town (Nieuwe Stad) to maintain the Dutch heritage. This was eventually simplified to Newtown. Among the English settlers in the present Elmhurst section of Newtown was Gershom Moore, in whose orchard a chance seedling produced the Newtown Pippin, Colonial America's most famous apple. The village of Newtown was established as the town seat for the township in 1683, when Queens County was rearranged into a "one county, five towns" model. The Town of Newtown, which had a town hall, jail, tax office, and town clerk's office, was the center of a municipality that comprised the villages that were located north of present-day Forest Park and west of Flushing Meadows.

Development came when a horsecar line, the Grand Street Line, came in 1854; the Long Island Rail Road's Main Line was built through Elmhurst in 1876, attracting more residents to the neighborhood. Cord Meyer bought land at Broadway and Whitney Avenue in 1896. He proposed that the town be renamed "Elmhurst", meaning "a grove of elms"; in 1897, one year before Queens County was incorporated in the Greater City of New York, the town was renamed. The renaming was done partially to disassociate the town from nearby Maspeth and the smelly, polluted Newtown Creek, and partially because elm trees (Ulmus americana) abounded in the area.

Elmhurst developed into a fashionable district due to a housing development that was built by the Cord Meyer Development Company between 1896 and 1910, north of the Port Washington Branch railroad station. They expanded their holdings between 1905 and 1930, including Elmhurst Square, Elmhurst South, Elmhurst Heights, and New Elmhurst. Elmhurst also became home to the Grand Street LIRR station just west of the current Grand Avenue – Newtown subway station. The Grand Street LIRR station was served by the Main Line and the former Rockaway Beach Branch. In 1936, the Independent Subway System's Queens Boulevard line was built through the neighborhood, spurring economic development but also destroying many old buildings.

Prior to World War II, Elmhurst was an almost exclusively Jewish and Italian neighborhood. Following the war, Elmhurst evolved into what has been considered one of the most ethnically diverse neighborhoods in New York City. By the 1980s, there were persons from 112 nations in residence in the neighborhood, which has continued to further diversify since then. Among the largest ethnic groups that have settled in the area are Latinos and Chinese Americans.

For many years, the Elmhurst gas tanks, a pair of large natural gas storage structures built in 1910 and 1921 on 57th Avenue between 74th and 80th Streets, were well-known landmarks, standing 200 feet (61 m) high. Because the Long Island Expressway frequently became congested in that area, "backup at the Elmhurst Gas Tanks" became a familiar phrase in radio traffic reporting. The gas storage facilities were removed in 2001, and the site was redeveloped and opened as the Elmhurst Park in 2011. 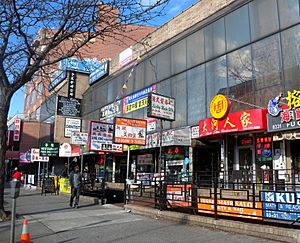 Elmhurst's Chinatown (唐人街, 艾浒) on Broadway is a satellite of the Flushing Chinatown.
For more details, see Chinatowns in Queens

Elmhurst's rapidly growing Chinatown (艾浒 唐人街) is the second in Queens, the other Chinatown being located in Flushing. Previously a small area with Chinese shops on Broadway between 81st Street and Cornish Avenue, this newly evolved second Chinatown in Queens has now expanded to 45th Avenue and Whitney Avenue and is developing as a satellite of the Flushing Chinatown. It is the second largest Chinese enclave in Queens, behind Flushing.

In Chinese translation, Elmhurst is named 艾浒 (Àihǔ in Standard Chinese). There are also many other Southeast Asian businesses and shops in the area, including Malaysian Chinese, Singaporean Chinese, Indonesian, Thai, and Vietnamese. Hong Kong Supermarket and New York Supermarket serve as the largest Chinese supermarkets selling different food varieties to this Elmhurst Chinatown. So far, the Asia Bank serves as the only Chinese bank and the main financial resource business for the growing enclave, though HSBC, Chase, and other banks also are located in Elmhurst along Broadway. Like Flushing's Chinatown, it is also very highly populated by Mandarin speakers, although many also speak other varieties of Chinese.

An annexation of the Elmhurst Chinatown is the neighborhood of Corona, Queens. 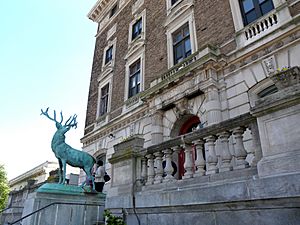 Places of worship include: 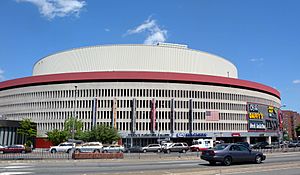 Side view of Queens Place from Queens Boulevard

The 150-store Queens Center, bounded by Queens Boulevard, 57th and 59th Avenues, and 90th and 94th Streets, opened on September 12, 1973, and was renovated and expanded across 92nd Street in 2002–4. With a gross leasable area of 1,000,000 square feet (93,000 m2), the mall has had retail sales per square foot nearly triple the national average. It was built on land previously occupied by a 24-ride children's amusement park named Fairyland, which opened in 1949 and closed in 1968. The site was also formerly a supermarket and automobile parking.

The smaller Queens Place, bounded by Queens Boulevard and by Justice, 55th, and 56th Avenues, is designed in a cylindrical shape and opened in 1965. Originally planned as a traditional rectangular construction designed to replace several blocks of residences, the mall had to be redesigned because the owner of the corner house at 55th Avenue and Queens Boulevard, Mary Sendek, refused to sell what had been her childhood home. The site of the corner home was demolished after Sendek died, and that site is now a small collection of stores. 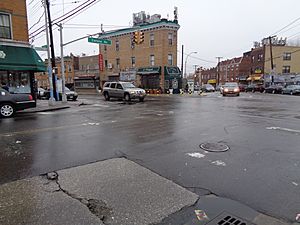 The intersection of Corona Avenue and Junction Boulevard in eastern Elmhurst

57th Avenue was known as the Flushing and Newtown Turnpike. Built in 1801, it connected with present-day Flushing Avenue in Maspeth, and extended all the way to Williamsburg, Brooklyn.

The Elks Lodge's name is shared by a local street, Elks Road, a short road in a cluster of 2- and 3-story orange and yellow brick buildings located between Grand Avenue, 79th Street, and Calamus Avenue, that were built in 1930 by Louis Allmendinger for the Matthews Company.

Horace Harding Expressway and Long Island Expressway was once a turnpike called Nassau Boulevard, which went from Elmhurst to Flushing, Bayside, and Little Neck. It was renamed for Horace J. Harding (1863–1929), a finance magnate who directed the New York, New Haven and Hartford Railroad and the New York Municipal Railways System; Harding encouraged city planner Robert Moses's system of parkways on New York, and after Harding died, the boulevard—now the service road of Interstate 495—was renamed after him.

Justice Avenue, an Elmhurst road that has existed since the American colonial period, follows an unusual curved path through Elmhurst due to a now-defunct railroad line immediately to the south.

Queens Boulevard, a wide at-grade highway that stretches from Long Island City to Jamaica, was formerly composed of two small dirt roads: Old Jamaica Road and Hoffman Boulevard. In the 1910s, it was paved and widened to 12 lanes. It is sometimes called the "Boulevard of Death" because of the high fatality rate on Queens Boulevard.

The majority of Whitney Avenue, which stretches from 83rd Street in the west to Roosevelt Avenue and 93rd Street to the northeast, is on a tilted street grid, developed in the early 20th century. The street grid consists of Broadway; Aske, Benham, Case, Denman, Elbertson, Forley, Gleane, Hampton, Ithaca, Judge, Ketcham, Layton, Macnish Streets; Ketcham Place; and Baxter, Pettit, Britton, Vietor, Elmhurst, Whitney, and Lamont Avenues. Whitney Avenue also has the most religious institutions of any street in Elmhurst.

Woodhaven Boulevard was known as Trotting Course Lane because it was named when horses were the main mode of transport. Although it extends to Cross Bay Boulevard in the Rockaways, two small parts of the original lane still exist in Forest Hills. 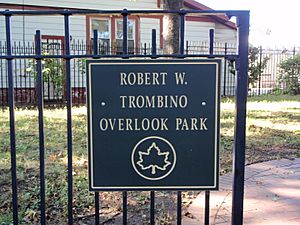 Elmhurst Park is on 57th Avenue west of 80th Street. There is a children's playground with slides, swings, and exercise machines, as well as walking paths and a lawn atop a hill. The land for the park was formerly occupied by gas tanks. The park itself was opened in 2011.

Moore Homestead Park is located between Broadway and 45th Avenue. There is a children's playground with slides and swings and there are different sections where people can play basketball, handball, and chess. The park is named after a nearby homestead owned by Clement Clarke Moore, whose ancestor John Moore helped negotiate Newtown's land area with the Native American population there. The park, originally acquired by the Independent Subway System and then turned into a playground, was renovated in the 1990s.

Frank D. O'Connor Playground is located on Broadway between Woodside Avenue and 78th Street. There is also a children playground, basketball and handball area. Opened in 1937 and renovated in 1996, the park is named after former state senator Frank D. O'Connor.

Veterans Grove is located on 43rd Avenue by Judge and Ketcham Streets. It is a small park mainly for younger children. The park's plaque states that it was dedicated "to the memory of those soldiers from Elmhurst who lost their lives serving in World War I." The park land was acquired in 1928, and the park was originally called the Elmhurst Memorial Park. It was renovated in 1994–6.

Horsebrook Island is a small triangular green space at the junction of 56th Avenue, Justice Avenue and 90th Street that was named after a stream that once ran through the Newtown settlement. The creek was buried in the first three decades of the twentieth century.

Libra Triangle is a small triangular green space at the junction of Justice Avenue and Broadway.

Newtown Playground is located on 92nd Avenue and 56th Street. There are two children's playgrounds, chess tables, swings, sprinklers, and a small lawn. The park is named after the original name of Elmhurst given by the English. It is one block away from Queens Center Mall and Newtown High School's athletic field.

McDowell's, the fictional restaurant depicted in the 1988 film Coming to America, is located in Elmhurst. For the week-long shot, the filmmakers cosmetically altered an existing Wendy's restaurant, which was closed in May 2013 and was razed by December 2013 to make way for condominiums. Images of surrounding streets were also used in the movie.

The CBS show Blue Bloods filmed for its third season on the residential streets of Elmhurst in 2012.

Part of the Revenge of the Green Dragons was filmed in Elmhurst with cameos from locals.

All content from Kiddle encyclopedia articles (including the article images and facts) can be freely used under Attribution-ShareAlike license, unless stated otherwise. Cite this article:
Elmhurst, Queens Facts for Kids. Kiddle Encyclopedia.