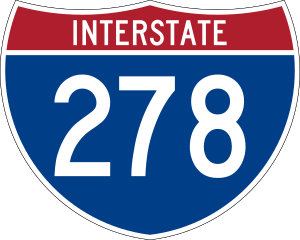 Interstate 278 is a Highway that is part of the Eisenhower Interstate System. It runs from US Highway 1-9 in Linden, NJ to the Cross Bronx Expresssway (I-95/I-295) in The Bronx. It's names include the Staten Island Expressway on Staten Island, the Brooklyn-Queens Expressway, (BQE) the Gowanus Expressway, the Robert F. Kennedy Bridge, and the Bruckner Expressway.

All content from Kiddle encyclopedia articles (including the article images and facts) can be freely used under Attribution-ShareAlike license, unless stated otherwise. Cite this article:
Interstate 278 Facts for Kids. Kiddle Encyclopedia.