Maspeth is a residential and commercial community in the borough of Queens in New York City. It was founded in the early 17th century by Dutch and English settlers. Neighborhoods sharing borders with Maspeth are Woodside to the north; Sunnyside to the northwest; Greenpoint, Brooklyn to the west; East Williamsburg, Brooklyn to the southwest; Fresh Pond and Ridgewood to the south; and Middle Village and Elmhurst to the east. 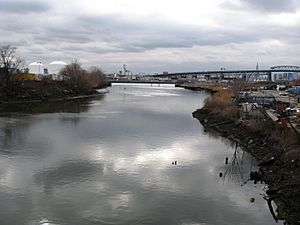 The name "Maspeth" is derived from the name of Mespeatches Indians, one of the 13 main Indian tribes that inhabited Long Island. It is translated to mean "at the bad waterplace" relating to the many stagnant swamps that existed in the area.

The area known today as Maspeth was chartered by New Netherlanders and English settlers in the early 17th century. The Dutch had purchased land in the area known today as Queens in 1635, and within a few years began chartering towns. In 1642, they settled Maspat, under a charter granted to Rev. Francis Doughty, making Maspeth the first English settlement in Queens; the deed that was signed between the Native Americans and the settlers was the first one signed on Long Island. As part of the deed's signature, the "Newtown Patent" granted 13,000 acres (5,300 ha) to settlers. Conflicts with the Maspat tribe forced many settlers to move to what is now Elmhurst in 1643. The settlement was leveled the following year in an attack by Native Indians, and the surviving settlers returned to Manhattan.

In 1652, settlers ventured back to the area, settling an area slightly inland from the previous Maspat location. This new area was called Middleburg, and eventually developed into what is now the town of Elmhurst, bordering Maspeth. Originally, 28 English Quakers had founded the village of Maspeth, which had sizable water and milling industries along Newtown Creek and Maspeth Creek. Two storekeepers, Nathanial Hazard and Francis T. White, sold food and clothes at the Maspeth Town Docks, at what is now 56th Terrace and Rust Street, by the late 18th century. After the American Revolutionary War, villagers repaved roads with crushed oyster shells or wooden planks.

Columbusville was the name formerly applied to a section of Maspeth. It was a development of Edward Dunn that took place on 69th Place (originally known as Firth Avenue) between Grand Avenue and Caldwell Avenue during 1854–55, and was subsequently absorbed into Maspeth. The name fell into disuse in the 1890s.

Following the immigration waves of the 19th century, Maspeth was home to a shanty town of Boyash (Ludar) Gypsies between 1925 and 1939, though this was eventually bulldozed. 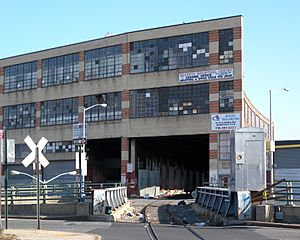 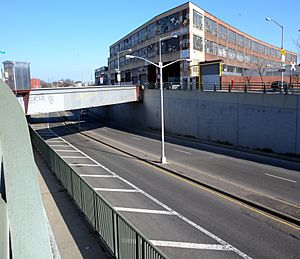 The area consisting of 43rd Street through 58th Street, including the former Furman Island, is industrial lowlands, and from 60th Street to 74th Street is residential. The Phelps Dodge Corporation was present from 1920 to 1983, during which matter from their premises contaminated Newtown Creek, which separates northern Brooklyn from western Queens and serves barge traffic. In the 2000s, politicians started to make efforts to clean up the Newtown and Maspeth Creeks. Freight train traffic moves on the Long Island Rail Road Montauk Branch and the lightly-used Bushwick Branch, both of which are used by the LIRR, New York and Atlantic Railway, and Conrail; in addition, the LIRR Bay Ridge Branch, a freight-only railway branch, separates the neighborhood from Elmhurst and Middle Village. A new West Maspeth rail freight station has been proposed in connection with a Cross-Harbor Rail Tunnel to diminish truck traffic across New York City. It is opposed by residents who do not want more trucks in Maspeth.

Single and multi-family dwellings make up most of Maspeth as there are few apartment buildings, except for the Ridgewood Gardens co-ops along 65th Place. Houses in Maspeth range from 400–600 thousand dollars. One particularly notable group of houses in the area is a cluster of 2- and 3-story orange and yellow brick buildings located between Grand Avenue, 79th Street, and Calamus Avenue; they were made for the Mathews Company and built in 1930 by Louis Allmendinger.

Much of the area's commerce is situated along Grand Avenue.

Cemeteries take up another large part of this small neighborhood, although they are separated from residential areas for the most part. The Mount Olivet Cemetery, the largest cemetery in the neighborhood, is located on a high hill in Maspeth and used to be an outer-borough vacation site. Mount Olivet Cemetery was planned on March 26, 1850, when James Maurice held a meeting at his Maspeth house to discuss the formation of the cemetery. Notable interments in the cemetery include cosmetics magnate Helena Rubinstein Courielli and sixteen victims of the 1911 Triangle Shirtwaist Factory fire.

The neighborhood, which is nearly isolated by the industrial areas and cemeteries surrounding it, is described by some residents as having a small-town feeling. It is bisected by I-495, the Long Island Expressway, though the two parts of Maspeth are connected by several crossings across the expressway. There are many community organizations, which have, among other things, preserved the neighborhood's small-town-like character; for example, they blocked the construction of a Home Depot at the site of what is now the Elmhurst Park.

The Maspeth Town Hall community center is located on 72nd Street. A one-room schoolhouse between 1897 and 1932, it was then occasionally used by a local girls' club and the Works Progress Administration until 1936. It was a New York City Police Department precinct until 1971. The building was renovated and made into a community center in 1972. 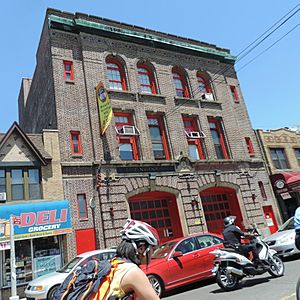 Other neighborhood institutions include the local Chamber of Commerce, the Lions Club, and the Maspeth Federal Savings Bank.

Public parks, operated by the New York City Department of Parks and Recreation, include the Frontera Park at 69th Street and I-495, as well as Principe Park at Maurice and 54th Avenues.

Maspeth is also home to the Metropolitan Oval, a playing field for soccer players, which contains a view of the Manhattan skyline.

At Grand Avenue and I-495, a plaque to "Horse Cars Rest Stop" exists. There used to be a horse cart barn at Brown Place, one block east of Grand Avenue. It is now Peter Charles Park, a small pocket park. When I-495 was built in the 1950s, it also demolished many streets; the construction of I-495 left many small triangular plazas behind, such as at 57th Road and 73rd Place, where the "Quick Brown Fox Park", another pocket park, is located. The park is named after a story about a quick brown fox. 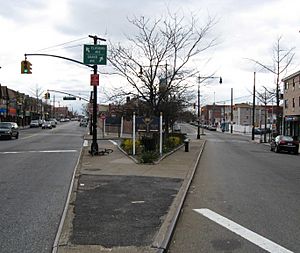 The intersection of Flushing Avenue and Grand Avenue, where a sign marks the separation of former streetcar lines

A sign at the intersection of Flushing, Grand, and Maspeth Avenues marks the place where streetcar lines (now the B57, Q58, Q59 bus routes) used to split.

On the front yard of the Church of the Transfiguration on Perry Avenue, a replica of a Lithuanian roadside shrine has stood since 1981.

St. Saviour’s Church, built in 1847 at Rust Street and 57th Drive, was located on land formerly owned by lawyer and politician James Maurice. After a 1970 arson, it was cleaned up. However, by 2005, developers bought the church in order to demolish it, since the New York City Landmarks Preservation Commission had refused to landmark the church. This was largely opposed; however, its facade was torn apart, disassembled, and stored at All Faiths Cemetery by 2008. Despite community effort, led by the Juniper Park Civic Association, to make a park on the site, by 2011, the church's former site had become warehouses, while provisions for a new site for the church in All Faiths Cemetery had been approved.

The Ridgewood Gardens apartment/co-op complex, on a hill known as the Ridgewood Plateau, was built on 72 acres (29 ha) woods owned by James Maurice and donated to the Episcopal Church in 1850. Maurice Woods was bounded by Maurice Avenue, Jay Avenue, 66th Street, and Borden Avenue. 53rd Avenue went down a slope to 64th Street. The apartment complex was built later. It is notable for a step street that descends the hill, as well as for a very old, graffiti-covered lamppost on that street.

The house where Anton Fausner’s wheelwright and wagonmaker’s shop was located is on Grand Avenue just south of I-495. Later, an auto shop, Maspeth Auto Parts, was located in that building. In 2006, that house was torn down and replaced by a bank. The wheelwright was patronized by farmers from Long Island who stayed at the Queens County Hotel, built in 1851 along Grand Avenue, on their way to the markets. 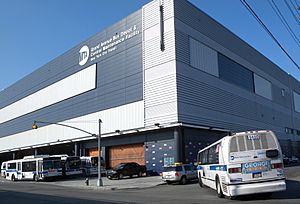 The Maspeth Theater, the neighborhood's largest theater in the 1920s, was built in 1924 at Grand Avenue and 69th Street by Straus and Strausberg, with 1,161 seats. It was owned by three companies before closing in 1965. Notable performers included Judy Garland. There were also many other theaters in Maspeth in the 1920s.

A former Maspeth supermarket, Wielback's Grocery—one of the oldest in the area—then became Griff's Hardware. In 2000, the building became Griff's Laundry, a laundromat that closed less than ten years later and was slated for demolition. The building was notable for a neon sign on its facade.

At Clinton Hall, a 1920s-built venue that had interior balconies and a large chandelier, there is now a laboratory and industrial offices. It is named after a mansion built by Judge Joseph Sackett. Sackett had built a wood-framed mansion behind the hall; later, New York Governor DeWitt Clinton planned the Erie Canal. The lands of the Sackett-Clinton House, as the mansion was called, were turned into a park by 1910, and the mansion burned down in 1933.

The Clinton Diner, at Maspeth and Maurice Avenues, was built in 1935 and is a truck stop that appeared in the movie Goodfellas, as well as in other movies. The Queens Head Tavern, nearby, was an American Revolutionary War-era tavern and was used as a stagecoach stop later on.

Most people who live in Maspeth are of Polish, Italian, or Irish descent.This is reflected in the many businesses in the neighborhood like Irish pubs and Italian and Polish specialty stores and markets. Many people of Eastern European, German, Chinese, or Hispanic origin (mostly Puerto Ricans from nearby Ridgewood) have also moved to the area.

Maspeth is devoid of direct transit connections to Manhattan, as there are no New York City Subway stations and no express bus stops in Maspeth. Local buses provide connections to the subway, but off-peak service on these buses is often unreliable. Local bus routes include:

The narrow Grand Street Bridge carries Grand Street eastward across the English Kills and Newtown Creek from Williamsburg where it becomes Grand Avenue, Maspeth's main street for dining and business. Grand Avenue continues eastward to end at Queens Boulevard in Elmhurst. There is also access to I-278, the Brooklyn-Queens Expressway and I-495, the Long Island Expressway. The former crosses the Newtown Creek on the Kosciuszko Bridge.

All content from Kiddle encyclopedia articles (including the article images and facts) can be freely used under Attribution-ShareAlike license, unless stated otherwise. Cite this article:
Maspeth, Queens Facts for Kids. Kiddle Encyclopedia.