The Co-operative Food facts for kids 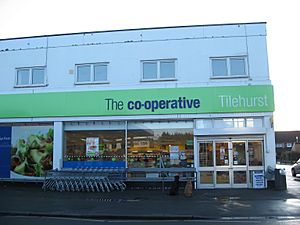 The Co-operative Food, sometimes simply known as the Co-op, is a brand used by the supermarket divisions of several consumer co-operatives in the United Kingdom, with The Co-operative Group being the largest most well known user. Co-operatives are businesses which are ultimately owned by their customer-members and staff-members with each member having an equal say in the business is run. Members elect the board and may vote on the strategic decisions of the business but are not usually involved in its day-to-day operations. Members also receive a percent of the company's earnings each year as a 'Dividend'.

All content from Kiddle encyclopedia articles (including the article images and facts) can be freely used under Attribution-ShareAlike license, unless stated otherwise. Cite this article:
The Co-operative Food Facts for Kids. Kiddle Encyclopedia.