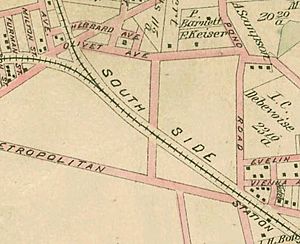 1891 map. Freshwater ponds were located in the upper right quadrant of the picture, near the intersection of Fresh Pond Road and Mount Olivet Avenue (now Mount Olivet Crescent).

Fresh Pond was a small middle class neighborhood in the New York City borough of Queens, separated from Juniper Valley by the Lutheran and Mount Olivet cemeteries. In present day, it is now considered part of the surrounding neighborhoods of Maspeth, Middle Village, Glendale, and Ridgewood (its neighbors to the northwest, northeast, southeast, and southwest, respectively) and is no longer referred to by the name "Fresh Pond." The area was originally named for two freshwater ponds that, in the early 1900s, were filled in. Other ponds were lower, and brackish due to Newtown Creek being estuarine.

All content from Kiddle encyclopedia articles (including the article images and facts) can be freely used under Attribution-ShareAlike license, unless stated otherwise. Cite this article:
Fresh Pond, Queens Facts for Kids. Kiddle Encyclopedia.