Corona is a neighborhood in the borough of Queens in New York City. It is bordered by Flushing to the east, Jackson Heights to the west, Forest Hills and Rego Park to the south, Elmhurst to the southwest, and East Elmhurst to the north. Corona has a multicultural population with a Latino majority, and is the site of historic African American and Italian American communities. After World War II, the majority of the neighborhood's residents were mostly Italian, German, Irish and of other European ancestries. Corona also has a significant Chinese population.

Corona is bordered on the east by Flushing Meadows–Corona Park, one of the largest parks in New York City and the site of the 1939 and 1964 World's Fairs. Located within the park are Citi Field, which replaced Shea Stadium as home of the New York Mets baseball team in 2009, and the USTA Billie Jean King National Tennis Center, where the US Open in tennis is held annually. In North Corona is the northern section of the historic Corona neighborhood, created in 1978 with the formation of the city's Community Boards and Community Districts, and the need for coterminous borders. Corona's main thoroughfares include Corona Avenue, Roosevelt Avenue, Northern Boulevard, Junction Boulevard, and 108th Street. The neighborhood is part of Queens Community Board 4, while the northernmost part is included in Community Board 3. Corona's ZIP code is 11368. Corona, with East Elmhurst, are often referred to as one combined area, Corona–East Elmhurst. 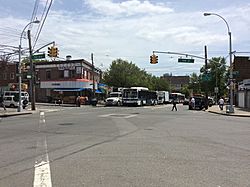 The intersection of Corona Avenue, 108th Street, and 52nd Avenue 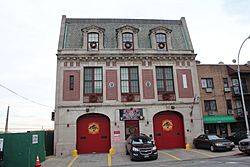 The area was originally known as West Flushing, but real estate developer Thomas Waite Howard, who became the first postmaster in 1872, petitioned to have the post office name changed to Corona in 1870, suggesting that it was the "crown of Queens County." Another theory is that the name Corona derives from the crown used as an emblem by the Crown Building Company, which is alleged to have developed the area; the Italian immigrants who moved into the new housing stock referred to the neighborhood by the Italian or Spanish word for "crown", or "corona". Either way, the name is a foreign translation of the word "crown."

Corona was a late 19th-century residential development in the northeastern corner of the old Town of Newtown. Real estate speculators from New York started the community in 1854, the same year that the New York and Flushing Railroad began service to the area largely to serve a newly opened race course. It was at the Fashion Race Course in 1858 that the first games of baseball to charge admission took place. The games, which took place between the All Stars of Brooklyn and the All Stars of New York, are commonly believed to be the first all star baseball games and in essence the birthplace of professional baseball. A trophy baseball from this tournament recently sold for nearly half a million US dollars.

During the second half of the 1940s through the 1960s, many legendary African American musicians, civil rights leaders and athletes moved to the neighborhood. In the last half of the 20th century, Corona saw dramatic ethnic successions. In the 1950s, what was predominantly an Italian American and African American neighborhood began to give way to an influx of Dominicans. In the late 1990s, Corona saw a new wave of immigrants from Latin America. The area north of Roosevelt Avenue contained the heart of the historic African American community. The intersection of 108th Street and Corona Avenue is the historic center of the Italian American community, sometimes referred to as Corona Heights. The majority Hispanic community now consists of Dominicans, Colombians, Ecuadorians, Salvadorans, Guatemalans, Bolivians, Peruvians, Mexicans, Venezuelans, and Chileans. There are also Asian Americans (Chinese, Indians, Koreans, Filipinos, and Japanese) as well as Italian Americans and African Americans. 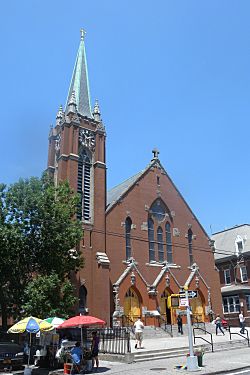 Our Lady of Sorrows, 37th Avenue 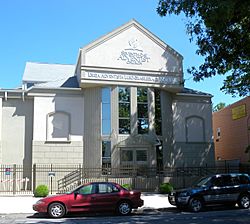 Corona has several private schools including School of the Transfiguration. Public schools include the High School for Arts and Business and P.S. 92.

There are many churches representing diverse denominations. Antioch Baptist Church at 103rd Street and Northern Boulevard is a prominent African American congregation dating to 1936 with a membership of 700. Our Lady of Sorrows Roman Catholic Church at 104th Street and 37th Avenue was built in 1899 largely out of red brick with a nearby convent of the same period. Today it conducts most of its masses in Spanish and attracts large weekend crowds. The Congregation Tifereth Israel was listed on the National Register of Historic Places in 2002.

Dorie Miller Residential Cooperative, built in 1952, comprises six buildings, containing 300 apartments, with 1,300 rooms in total. The cooperative is named after Doris "Dorie" Miller, a U.S. Naval hero at Pearl Harbor and the first African American recipient of the Navy Cross. Among its original residents were jazz greats Nat Adderley & Jimmy Heath; Kenneth and Corien Drew, publishers of Queens' first African-American newspaper, The Corona East Elmhurst News, Thelma E. Harris founder of Aburi Press and prominent Queens Judge Henry A, Slaughter. Corona was also the childhood home of Marie Maynard Daly. A biochemist, Daly was the first African American woman to earn a Ph.D. in Chemistry. Daly studied the effects of cholesterol on the mechanics of the heart, the effects of sugars and other nutrients on the health of arteries, and the breakdown of the circulatory system as a result of advanced age or hypertension; this scientist subsequently studied how proteins are produced and organized in the cell and the composition and metabolism of components of the cell nucleus.

The Louis Armstrong House attracts visitors to the neighborhood and preserves the legacy of musician Louis Armstrong, one of Corona's most prominent historical residents. It was designated a National Historic Landmark in 1976.

According to the 2010 Census, the total population of Corona was about 110,000. Corona is overwhelmingly Hispanic with all other demographics (Asian, black, and non-Hispanic white) being definitively below the borough average.

Corona/East Elmhurst also houses one of the most extensive collections of African American art and literature in the Langston Hughes Community Library and Cultural Center, which serves Queens with reference and circulating collections, totaling approximately 30,000 volumes of materials written about or relating to black culture. The Black Heritage Reference Center of Queens County includes books, periodicals, theses and dissertations, VHS videos, cassettes and CDs, photographs, posters, prints, paintings, and sculpture. Cultural arts programs are scheduled through the Center. Meeting space is available to community organizations by application. Special features of the Center include: 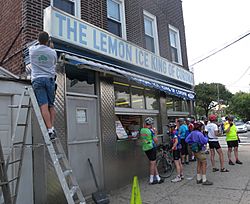 All content from Kiddle encyclopedia articles (including the article images and facts) can be freely used under Attribution-ShareAlike license, unless stated otherwise. Cite this article:
Corona, Queens Facts for Kids. Kiddle Encyclopedia.