The Navy Cross is bestowed by the Secretary of the Navy and may also be awarded to members of the other armed services, and to foreign military personnel while serving with the U.S. naval services. The Navy Cross was established by Act of Congress (Public Law 65-253) and approved on February 4, 1919.

The Navy Cross was instituted in part due to the entrance of the United States into World War I. Many European nations had the custom of decorating heroes from other nations, but the Medal of Honor was the sole U.S. award for valor at the time. The Army instituted the Distinguished Service Cross and Distinguished Service Medal in 1918, while the Navy followed suit in 1919, retroactive to 6 April 1917. Originally, the Navy Cross was lower in precedence than the Medal of Honor and the Navy Distinguished Service Medal, because it was awarded for both combat heroism and for "other distinguished service". Congress revised this on 7 August 1942, making the Navy Cross a combat-only decoration that follows the Medal of Honor in order of precedence. Since the medal was established, it has been awarded more than 6,300 times. It was designed by James Earle Fraser. Since the 11 September attacks the Navy Cross has been awarded 47 times, with two of them having the name of the recipient held in secret. One of those secret awardings was due to actions during the 2012 Benghazi attack.

The Navy Cross may be awarded to any member of the U.S. Armed Forces while serving with the Navy, Marine Corps, or Coast Guard (when a part of the Department of the Navy) who distinguishes himself in action by extraordinary heroism not justifying an award of the Medal of Honor. The action must take place under one of three circumstances:

The act(s) to be commended must be performed in the presence of great danger, or at great personal risk, and must be performed in such a manner as to render the individual's action(s) highly conspicuous among others of equal grade, rate, experience, or position of responsibility. An accumulation of minor acts of heroism does not justify an award of the Navy Cross. As originally authorized, the Navy Cross could be awarded for distinguished non-combat acts, but legislation of 7 August 1942 limited the award to acts of combat heroism.

Additional awards of the Navy Cross are denoted by gold or silver 5⁄16 inch stars affixed to the suspension and service ribbon of the medal. A gold star would be issued for each of the second through fifth awards, to be replaced by a silver star which would indicate a sixth award. To date no one has received more than five awards. 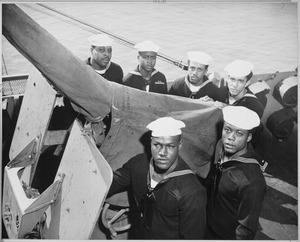 Crew members of USS Intrepid: AtM2/c Jonell Copeland; StM Que Gant; StM Harold Clark, Jr.; StM James Dockery; StM Alonzo Swann; and StM Eli Benjamin, were awarded the Navy Cross for being the only gun crew who would fire one of their aircraft carrier's anti-aircraft guns into a kamikaze dive bomber as it was diving towards the carrier's flight deck and their battle station(s) during the Battle of Leyte Gulf in 1944

The earliest version of the Navy Cross (1919–1928) featured a more narrow strip of white, while the so-called "Black Widow" medals awarded from 1941 to 1942 were notable for the dark color due to over-anodized finish. The medal is similar in appearance to the British Distinguished Service Cross.

Obverse: The medal is a modified cross pattée one and a half inches wide. The ends of its arms are rounded whereas a conventional cross patée has arms that are straight on the end. There are four laurel leaves with berries in each of the re-entrant arms of the cross. In the center of the cross, a sailing vessel is depicted on waves, sailing to the viewer's left. The vessel is a symbolic caravel of the type used between 1480 and 1500. Fraser selected the caravel because it was a symbol often used by the Naval Academy and because it represented both naval service and the tradition of the sea. The laurel leaves with berries refer to achievement.

Reverse: In the center of the medal, a bronze cross pattée, one and a half inches wide, are crossed anchors from the pre-1850 period, with cables attached. The letters USN are evident amid the anchors.

The service ribbon is navy blue with a center stripe of white identical to the suspension ribbon of the medal. The blue alludes to naval service; the white represents the purity of selflessness.

All content from Kiddle encyclopedia articles (including the article images and facts) can be freely used under Attribution-ShareAlike license, unless stated otherwise. Cite this article:
Navy Cross Facts for Kids. Kiddle Encyclopedia.