Doris "Dorie" Miller (October 12, 1919 – November 24, 1943) was an American Sailor in the United States Navy. He manned anti-aircraft guns during the attack on Pearl Harbor on December 7, 1941, for which he had no training, and tended to the wounded. He was recognized by the Navy for his actions and awarded the Navy Cross.

He was the first black American to be awarded the Navy Cross, the second highest decoration for valor awarded by the Navy, after the Medal of Honor. Miller's acts were heavily publicized in the black press, making him an iconic emblem of the war for black Americans. Nearly two years after Pearl Harbor, he was killed in action when his ship Liscome Bay was sunk by a Japanese submarine during the Battle of Makin.

Miller was born in Waco, Texas, on October 12, 1919, to Connery and Henrietta Miller. He was named Doris, as the midwife who assisted his mother was convinced that the baby would be female. He was the third of four sons and helped around the house, cooked meals and did laundry, as well as working on the family farm. He was a fullback on the football team at Waco's A.J. Moore High School. He began attending the 8th grade again on January 25, 1937 at the age of 17 but was forced to repeat the grade the following year, so he decided to drop out of school. He filled his time squirrel hunting with a .22 rifle and completed a correspondence course in taxidermy. He applied to join the Civilian Conservation Corps, but was not accepted. At that time, he was 6 feet 3 inches (1.91 m) tall and weighed more than 200 pounds (91 kg).

Miller worked on his father's farm until shortly before his 20th birthday, then enlisted in the United States Navy on September 16, 1939. He did his training at Naval Station Norfolk in Virginia, then was promoted to Mess Attendant Third Class, one of the few ratings open at the time to black sailors. After training school, he was assigned to the ammunition ship Pyro and then transferred on January 2, 1940 to the battleship West Virginia. It was on the West Virginia where he started competition boxing, becoming the ship's heavyweight champion. He was promoted to Mess Attendant Second Class on February 16, 1941. In July, he was on temporary duty aboard the Nevada at Secondary Battery Gunnery School. He returned to the West Virginia in August 1941.

Miller's nickname "Dorie" may have originated from a typographical error. He was nominated for recognition for his actions on December 7, 1941, and the Pittsburgh Courier released a story on March 14, 1942 which gave his name as "Dorie Miller". Since then, some writers have suggested that it was a "nickname to shipmates and friends." 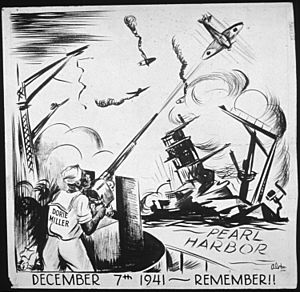 Miller was a crewman aboard the West Virginia and awoke at 6 a.m. on December 7, 1941. He served breakfast mess and was collecting laundry at 7:57 a.m. when Lieutenant Commander Shigeharu Murata from the Japanese aircraft carrier Akagi launched the first of seven torpedoes that hit West Virginia. The "Battle Stations" alarm went off; Miller headed for his battle station, an anti-aircraft battery magazine amidships, only to discover that a torpedo had destroyed it.

He went then to "Times Square", a central spot aboard the ship where the fore-to-aft and port-to-starboard passageways crossed, reporting himself available for other duty. Lieutenant Commander Doir C. Johnson, the ship's communications officer, spotted Miller and saw the potential of his powerful build, so he ordered him to accompany him to the bridge to assist in moving the captain, Mervyn Bennion, who had a gaping wound in his abdomen where he had apparently been hit by shrapnel. Miller and another sailor lifted the skipper but were unable to remove him from the bridge, so they carried him from his exposed position on the damaged bridge to a sheltered spot behind the conning tower. The captain refused to leave his post, questioned his officers about the condition of the ship, and gave orders.

Lieutenant Frederic H. White ordered Miller to help him and Ensign Victor Delano load the unmanned number 1 and number 2 Browning .50 caliber anti-aircraft machine guns aft of the conning tower. Miller was not familiar with the weapon, but White and Delano instructed him on how to operate it. Delano expected Miller to feed ammunition to one gun, but his attention was diverted and, when he looked again, Miller was firing one of the guns. White then loaded ammunition into both guns and assigned Miller the starboard gun.

Miller fired the gun until he ran out of ammunition, when he was ordered by Lieutenant Claude V. Ricketts to help carry the captain up to the navigation bridge out of the thick oily smoke generated by the many fires on and around the ship. Bennion was only semi-conscious at this point and died soon afterward. Japanese aircraft eventually dropped two armor-piercing bombs through the deck of the battleship and launched five 18-inch (460 mm) aircraft torpedoes into her port side. When the attack finally lessened, Miller helped move injured sailors through oil and water to the quarterdeck, thereby "unquestionably saving the lives of a number of people who might otherwise have been lost."

The ship was heavily damaged by bombs, torpedoes, and resulting explosions and fires, but the crew prevented her from capsizing by counter-flooding a number of compartments. Instead, West Virginia sank to the harbor bottom as her surviving crew abandoned ship, including Miller. 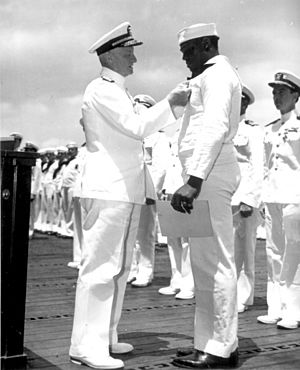 Admiral Chester W. Nimitz pins the Navy Cross on Doris Miller, at ceremony on board USS Enterprise (CV-6) at Pearl Harbor, May 27, 1942.

On December 15, Miller was transferred to the heavy cruiser Indianapolis. On January 1, 1942, the Navy released a list of commendations for actions on December 7. Among them was a single commendation for an unnamed black man. The National Association for the Advancement of Colored People (NAACP) had asked President Franklin D. Roosevelt to award the Distinguished Service Cross to the unknown black sailor. The Navy Board of Awards received a recommendation that the sailor be considered for recognition. On March 12, 1942, an Associated Press story named Miller as the sailor, citing the African-American newspaper Pittsburgh Courier; additional news reports credited Lawrence D. Reddick with learning the name through correspondence with the Navy Department. In the following days, Senator James M. Mead (D-NY) introduced a Senate bill [S.Res. 2392] to award Miller the Medal of Honor, and Representative John D. Dingell, Sr. (D-MI) introduced a matching House bill [H.R. 6800].

Miller was recognized as one of the "first US heroes of World War II". He was commended in a letter signed by Secretary of the Navy Frank Knox on April 1, and the next day, CBS Radio broadcast an episode of the series They Live Forever, which dramatized Miller's actions.

Black organizations began a campaign to honor Miller with additional recognition. On April 4, the Pittsburgh Courier urged readers to write to members of the congressional Naval Affairs Committee in support of awarding the Medal of Honor to Miller. The All-Southern Negro Youth Conference launched a signature campaign on April 17–19. On May 10, the National Negro Congress denounced Knox's recommendation against awarding Miller the Medal of Honor. On May 11, President Roosevelt approved the Navy Cross for Miller.

On May 27, 1942, Miller was personally recognized by Admiral Chester W. Nimitz, Commander in Chief, Pacific Fleet, aboard the aircraft carrier Enterprise in Pearl Harbor. Nimitz presented Miller with the Navy Cross, at the time the third-highest Navy award for gallantry during combat, after the Medal of Honor and the Navy Distinguished Service Medal. (On August 7, 1942, Congress revised the order of precedence, placing the Navy Cross above the Distinguished Service Medal in precedence.) The citation reads as follows:

For distinguished devotion to duty, extraordinary courage and disregard for his own personal safety during the attack on the Fleet in Pearl Harbor, Territory of Hawaii, by Japanese forces on December 7, 1941. While at the side of his Captain on the bridge, Miller, despite enemy strafing and bombing and in the face of a serious fire, assisted in moving his Captain, who had been mortally wounded, to a place of greater safety, and later manned and operated a machine gun directed at enemy Japanese attacking aircraft until ordered to leave the bridge.

Nimitz said of Miller's commendation, "This marks the first time in this conflict that such high tribute has been made in the Pacific Fleet to a member of his race and I'm sure that the future will see others similarly honored for brave acts." 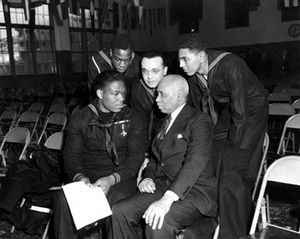 Miller was advanced to Mess Attendant First Class on June 1, 1942. On June 27, the Pittsburgh Courier called for him to be allowed to return home for a war bond tour along with white war heroes. On July 25, the Pittsburgh Courier ran a photo of Miller with the caption "He Fought... Keeps Mop" next to a photo of a white survivor of the Pearl Harbor attack receiving an officer's commission. The photo caption stated that the Navy felt that Miller was "too important waiting tables in the Pacific" for him to return to the United States. 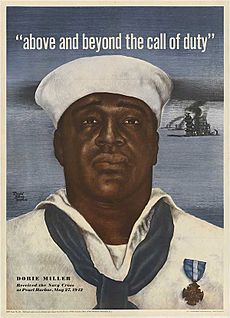 On November 23, 1942, Miller returned to Pearl Harbor and was ordered on a war bond tour while still attached to Indianapolis. In December 1942 and January 1943, he gave presentations in Oakland, California, in his hometown of Waco, in Dallas, and to the first graduating class of black sailors from Great Lakes Naval Training Station.

He then reported to Puget Sound Navy Yard on May 15, 1943, and was advanced to Cook First Class on June 1 when he reported to the escort carrier Liscome Bay. He was featured on the 1943 Navy recruiting poster "Above and beyond the call of duty", designed by David Stone Martin.

After training in Hawaii, Liscome Bay took part in the Battle of Makin beginning on November 20, 1943. On November 24, the ship was struck in the stern by a torpedo from the Japanese submarine I-175. The aircraft bomb magazine detonated a few moments later, causing the ship to sink in 23 minutes. There were 272 survivors from the crew of over 900, but Miller was among the two-thirds of the crew listed as "presumed dead". His parents were informed that he was missing in action on December 7, 1943, two years after his heroic actions at Pearl Harbor.

A memorial service was held on April 30, 1944, at the Second Baptist Church in Waco, Texas, sponsored by the Victory Club. On May 28, a granite marker was dedicated at Moore High School in Waco to honor him. Miller was officially declared dead by the Navy on November 25, 1944, a year and a day after the loss of Liscome Bay. 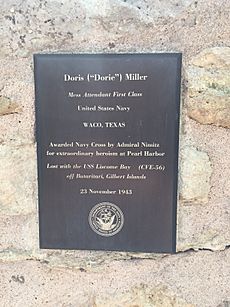 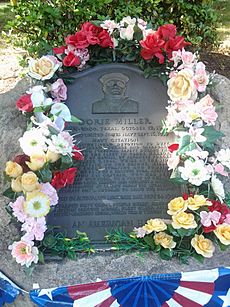 Dorie Miller memorial at the housing cooperative named for him in Corona, Queens 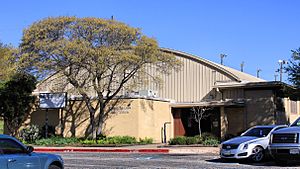 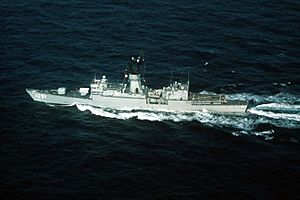 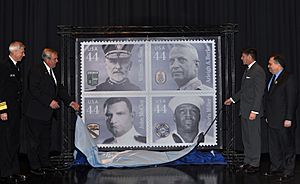 Unveiling the Distinguished Sailors commemorative stamp series during a ceremony at the U.S. Navy Memorial

All content from Kiddle encyclopedia articles (including the article images and facts) can be freely used under Attribution-ShareAlike license, unless stated otherwise. Cite this article:
Doris Miller Facts for Kids. Kiddle Encyclopedia.