Ennis is a city in Ellis County, Texas, United States, located south of Dallas. The population was 18,513 at the 2010 census, up from 16,454 at the 2000 census. The city is notable for its historic Czech heritage, with several community halls dedicated to different fraternities and organizations celebrating Bohemian, Moravian, and Slovak heritage. It is also home to the Bluebonnet Festival, the National Polka Festival, and several National Hot Rod Association drag races at the Texas Motorplex, most notably the AAA Texas NHRA FallNationals. 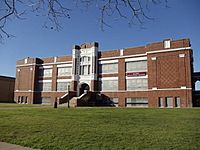 Completed in 1916, Ennis High School operated from this building until the school relocated to its present-day location in 1982. After briefly serving as the city's Junior High, it is now known today as the Alamo Education Center, home to the school district's alternative education programs. 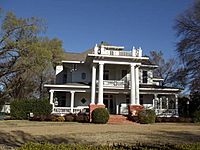 The Moore House is one of several dozen historical homes in the Templeton-McCanless Residential Historic District. 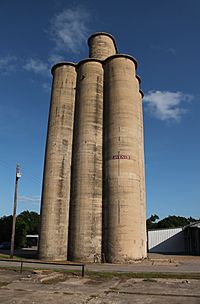 In 1872 the Houston and Central Texas Railroad (H&TC) arrived at the spot that would become Ennis. The city is named for Cornelius Ennis, an official of the railroad. Ennis served as Mayor of Houston (1856–57), and as a director of the Houston Tap and Brazoria Railway and H&TC.

In 1891, the H&TC chose Ennis as its northern division headquarters in an agreement requiring that Ennis provide water for the railroad. The machine shops and roundhouse employed several hundred men. One condition of the agreement was that as long as Ennis was able to furnish water the shops could not be moved from the community. The city built the first of three lakes for this purpose in 1892, followed by another in 1895, and the last in 1940

The railroad also led to the expansion of the cotton industry, providing access to foreign and domestic markets through the port of Houston. By 1920, a total of 152,601 bales of cotton were ginned and shipped from Ellis County, the most of any county in America. The Ennis Chamber of Commerce adopted the slogan 'Where Railroads and Cotton Fields Meet."

Railroads and cotton produced the wealth that could be seen in the residential development of the city. Residents built beautiful churches of many different denominations and numerous fraternal organizations met regularly. Elegant houses along “the Avenue” and north were accompanied by dozens of Folk Victorian houses and Craftsman style bungalows.

By mid-twentieth century Ennis had become a modern community with schools, three movie theaters, several drugstores, banks and automobile dealerships. The sons and daughters of early settlers had developed new traditions like the National Polka Festival and the Ennis Bluebonnet Trail. Moreover, the city was connected to Dallas to the north and Houston to the South by Interstate Highway 45. Since then, citizens of Ennis have been able to experience the best of two worlds, participation in the attractions of a large, dynamic city and the familiar street-scape of a unique, nurturing community.

The commercial strip along Ennis Ave. between Downtown and Interstate 45 was hit by a tornado in the May 15–17, 2013 tornado outbreak, rendering 4 homes uninhabitable and damaging as many as 55 businesses. The damage caused by the EF1 impacted the National Register Historic District and many of the other businesses in town, some of which are pending demolition. However, these damaged buildings were purchased by developers in the hopes of revitalizing the Downtown Historical District. These revitalization plans were implemented in the Downtown Comprehensive Plan, and the city was re-admitted to the Texas Main Street Program in January 2015. Today, the downtown area is home to several successful start-ups, with future plans calling for further emphasis on local business, pedestrian friendliness, and the development of parks, plazas, and new urbanist development along the outskirts of the district.

Ennis is in the northeastern region of Texas, in eastern Ellis County. Interstate 45 passes through the east side of the city, with access from Exits 247 through 255. I-45 leads north 35 miles (56 km) to Dallas and south 205 miles (330 km) to Houston. U.S. Route 287 curves around the south side of Ennis and leads northwest 15 miles (24 km) to Waxahachie, the Ellis County seat. Texas State Highway 34 passes through the center of Ennis, leading northeast 26 miles (42 km) to Kaufman and southwest 20 miles (32 km) to Italy. Waco is 73 miles (117 km) to the southwest.

The climate in this area is characterized by hot, humid summers and generally mild to cool winters. According to the Köppen Climate Classification system, Ennis has a humid subtropical climate, abbreviated "Cfa" on climate maps.

There were 5,335 households out of which 38.1% had children under the age of 18 living with them, 54.4% were married couples living together, 14.5% had a female householder with no husband present, and 26.0% were non-families. 22.8% of all households were made up of individuals and 10.1% had someone living alone who was 65 years of age or older. The average household size was 2.95 and the average family size was 3.45.

The annual National Polka Festival which features Czech cuisine, polka music, dancing, and a parade is held on Memorial Day weekend. The festival started in 1967 by a group of men who thought their Czech heritage should be honored. There is also a contest to find who the Duke and Dutchess of Ennis will be for the year. During the 3 day festival, the Ennis Polka Run takes place to help fund the Rotary Club and the Children's Reading Club of Ennis. 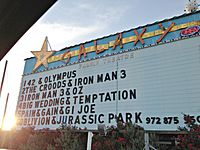 The Galaxy Drive-In Theater opened in 2004 in Garrett, Texas, just north of Ennis on I-45.

Lake Bardwell is a reservoir managed by the U.S. Army Corps of Engineers located 5 miles south of Ennis. It is a flood-control reservoir in the Trinity River Basin and a conservation pool in the Trinity Valley Authority. Surrounding the lake is a park system consisting of Big Mustang Creek Park, Little Mustang Creek Park, High View Park, Love Park, Mott Park, and Highview Marina, all of which offer boat ramps. The lake and parks offer hiking, horseback riding, camping, fishing, and sport boating opportunities.

The Galaxy Drive-In movie theatre opened in 2004 and draws visitors from around the area, and is most notable for being one of only two drive-in theaters operating in the DFW Metroplex.

Ennis is home to the Texas Motorplex, a quarter-mile drag racing facility built in 1986 by former funny car driver Billy Meyer. It annually hosts the NHRA O'Reilly Fall Nationals each September, when hundreds of professional and amateur drag racers compete for over $2 million in prize money.

The Ennis Railroad and Cultural Heritage Museum is housed in the former Van Noy restaurant building. The museum's collections include: railroad and cultural memorabilia including items related to the Houston and Central Texas Railroad; a large diorama of the old engine roundhouse that once existed just north of the museums location; a large collection of rare china; and a MKT caboose.

The Kachina Prairie is one of the last remaining examples of untouched Texas blackland prairies. Ennis' first bluebonnet trail was marked through this area in 1939.

Scenes from the documentary Flight of the Butterflies (2012) were filmed on Ennis' bluebonnet trails.

All content from Kiddle encyclopedia articles (including the article images and facts) can be freely used under Attribution-ShareAlike license, unless stated otherwise. Cite this article:
Ennis, Texas Facts for Kids. Kiddle Encyclopedia.