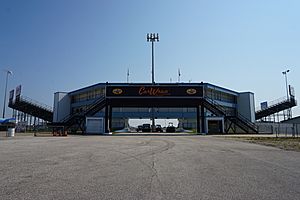 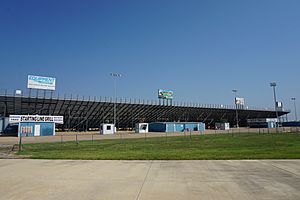 The Texas Motorplex is a quarter mile drag racing facility located in Ennis, Texas, United States, 40 miles (64 km) south of downtown Dallas. Built in 1986 by former funny car driver Billy Meyer, the Motorplex was the first National Hot Rod Association (NHRA) "super track." It annually hosts the AAA Texas NHRA FallNationals each October, when hundreds of professional and amateur drag racers compete for over $2 million in prize money. Past winners have included John Force, Kenny Bernstein, and Tony Schumacher. Perhaps the one identifying feature of the track, is that from the burnout pad, to the shutdown area, it is the only all concrete strip within the NHRA's schedule of events.

The Texas Motorplex was the first all-concrete stadium-style drag racing facility ever constructed. Built in 1986, The Texas Motorplex has been the place of many drag racing milestones and world record performances. The Billy Meyer-owned facility hosts a number of racing and car show events between March and November each year and also features the Champions Club – an 11,000-square-foot (1,000 m2) facility – that serves fully catered events throughout the year.

Nov. 1985: Billy Meyer signs an agreement to host an NHRA event the following September, before ground was broken on the facility.

1997: The Texas Motorplex opens the Divisional 4 Hall of Fame, becoming the only track to host a hall of fame.

1997: The Texas Motorplex becomes the first facility to build a permanent hospitality structure to host fans in a VIP atmosphere; originally known as The Top Eliminator Club and now known as the Champions Club.

Sept. 23, 2004: The Texas Motorplex becomes the first NHRA track in the country to have starting line balcony seating in the tower suites.

All content from Kiddle encyclopedia articles (including the article images and facts) can be freely used under Attribution-ShareAlike license, unless stated otherwise. Cite this article:
Texas Motorplex Facts for Kids. Kiddle Encyclopedia.