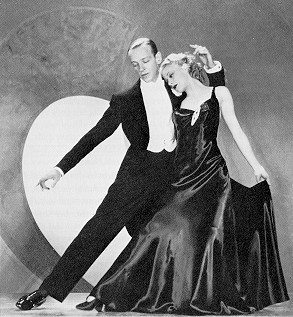 During her long career, she made a total of 73 films, collaborating with Fred Astaire as a romantic lead actress and dancing partner in a series of ten Hollywood musical films that revolutionized the genre.

She achieved great success on her own in a variety of film roles and won the Academy Award for Best Actress for her performance in Kitty Foyle (1940). She ranks #14 on the AFI's 100 Years...100 Stars list of actress screen legends. She also appeared on numerous television programs. She died of a heart attack in Rancho Mirage, California.

Rogers was most famous for her partnership with Fred Astaire. Together, from 1933 to 1939, they made nine musical films at RKO and one at MGM. They revolutionized the Hollywood musical, introducing dance routines of unprecedented elegance and virtuosity, set to songs specially composed for them by the greatest popular song composers of the day.

All content from Kiddle encyclopedia articles (including the article images and facts) can be freely used under Attribution-ShareAlike license, unless stated otherwise. Cite this article:
Ginger Rogers Facts for Kids. Kiddle Encyclopedia.