Lucille Désirée Ball (August 6, 1911 – April 26, 1989) was an American comedian, model, movie and television actress and studio executive. She was the star of the sitcoms I Love Lucy, The Lucy–Desi Comedy Hour, The Lucy Show, Here's Lucy and Life With Lucy. Ball was one of the most popular and powerful actors in the United States during her lifetime. She also had one of Hollywood's longest careers.

Ball began acting in the 1930s. She became both a radio actress and B-movie star in the 1940s. Her television career began in the 1950s. She was still making movies in the 1960s and 1970s. In 1962, Ball became the first woman to run a major television studio, Desilu. This studio made many successful and popular television series.

In 1929, Ball got work as a model. She later began her performing career on Broadway using the stage name Diane Belmont. She was in many small movie roles in the 1930s. She worked for RKO Radio Pictures at the time. Ball was named the "Queen of the Bs".

In 1951, Ball was important in the creation of the television series I Love Lucy. The show ended in 1957 after 180 episodes. Then, some small changes were made to the series format. The time-length of the series was changed from 30 minutes to 60 minutes. The first program lasted 75 mins. Some new characters were added. The story was changed. After these changes, the program was renamed The Lucy-Desi Comedy Hour. It was shown from 1957 until 1960.

Ball met and married Cuban band leader Desi Arnaz in 1940. On July 17, 1951, she gave birth to their first child, Lucie Désirée Arnaz. A year and a half later, Ball gave birth to their second child, Desiderio Alberto Arnaz IV, known as Desi Arnaz, Jr. Ball and Arnaz divorced on 4 May 1960.

On April 18, 1989, Ball said she had chest pains at her home in Beverly Hills and was taken to Cedars-Sinai Medical Center, where she had dissecting aortic aneurysm and had an eight-hour aortic transplant. The surgery worked, and Ball was soon able to walk around her room with very little help. She got a lot of get-well wishes.

Ball was nominated for an Emmy Award thirteen times. She won four times. In 1977 Ball was one of the first people to be given the Women in Film Crystal Award. She was given the Golden Globe Cecil B. DeMille Award in 1979, the Lifetime Achievement Award from the Kennedy Center Honors in 1986, and the Governors Award from the Academy of Television Arts & Sciences in 1989. 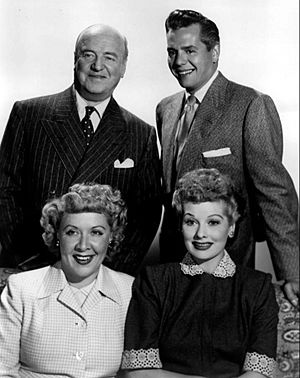 Cast of I Love Lucy with William Frawley, Desi Arnaz and Vivian Vance.

All content from Kiddle encyclopedia articles (including the article images and facts) can be freely used under Attribution-ShareAlike license, unless stated otherwise. Cite this article:
Lucille Ball Facts for Kids. Kiddle Encyclopedia.