Kids Encyclopedia Facts
This page is about the lake in New York. For other uses, see Chautauqua (disambiguation).

The lake's name comes from the now-extinct Erie language. Because the Erie people were defeated in the Beaver Wars before a comprehensive study of their language could be made, its meaning remains unknown and a source of speculation, with two longstanding folk translations being “bag tied in the middle” and “place where fish are taken out,” the latter having some support based on similar words in other Iroquoian languages. A Seneca legend, dating at least to the days of Seneca diplomat John Cornplanter Abeel, attests to the Chautauqua having a reputation as a "place of easy death."

While the lake has a similar geologic structure (a very long, narrow valley) to the Finger Lakes in the east, it is not considered one of the Finger Lakes. Chautauqua Lake runs perpendicular to the westernmost of those lakes (much like an opposable thumb), lies in a different watershed, and was likely formed by a different process.

Chautauqua Lake, at an elevation of 1,308 feet (399 m) above sea level, is higher than any of the Finger Lakes. It is also one of the highest navigable lakes in North America.

The water from the lake drains to the south, emptying first into the Chadakoin River in Jamestown, New York, before traveling east into Cassadaga Creek and Conewango Creek, south into the Allegheny River in Warren, Pennsylvania, and the Ohio River in Pittsburgh, instead of moving north into the Great Lakes. Chautauqua Creek and Little Chautauqua Creek have their headwaters near the lake, but flow north into lake Erie. The drainage divide was spanned by Pierre-Joseph Céloron de Blainville in his 1749 Ohio River expedition that started from Montreal, and the town of Celoron at the southern end of the lake is named for him. The lake's drainage area is about 180 square miles (470 km2).

Also at the southern end of the lake is the City of Jamestown while the Village of Mayville is located at the northern end. Other communities located on the lake are Bemus Point, Maple Springs, Lakewood and Chautauqua, the site of the influential Chautauqua Institution founded in 1874. There are many other settlements located on the lake, including Fluvanna, Greenhurst, Dewittville, Stow, and Ashville Bay.

As of February 19, 2008, Chautauqua Lake has the unique distinction of being an unorganized territory within Chautauqua County. Unlike most large bodies of water in New York which are administratively divided up among the surrounding towns, villages, and cities, Chautauqua Lake is demarcated by the USGS and U.S. Census Bureau as a nonfunctioning political division of its own. 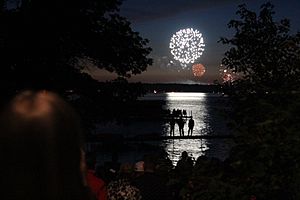 Fireworks above Chautauqua Lake on the Fourth of July 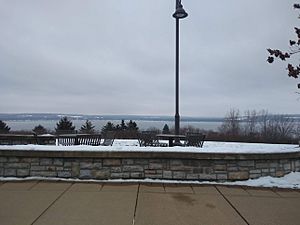 The lake is used primarily for recreation, such as boating and fishing, and tourism. The majority of tourists flock to the Chautauqua Institution, which contains a wide variety of stores and restaurants and is home to live music entertainment and many public lectures during the summer months. Chautauqua Lake is known for its muskellunge fishing and sailing. There are two very popular boating locations on the lake, "Sandy Bottoms", and Long Point State Park, located near Maple Springs. On busy, warm weekends, it is not uncommon to see nearly 100 boats in this area of the lake. Every Fourth of July, fireworks are launched from communities around the lake.

There is one bridge that connects the opposite sides of the lake, the Veterans Memorial Bridge (also known as the Chautauqua Lake Bridge). The structure was completed on October 30, 1982 and joins Bemus Point to Stow on I-86 (at the time known as Route 17). Prior to the construction of the bridge, the only means for cars to cross the lake was the Bemus Point–Stow ferry, a nine car cable guided ferry, which still operates during the summer months and has become more of a tourist attraction. The cost of the ferry ride is free, though donations are accepted, and it is operated by the Sea Lion Project Ltd.

The lake is the home of the Chautauqua Belle, a replica sternwheeler steamboat constructed in 1975 for the US Bicentennial, which offers sightseeing cruises on the lake.

The Summer Wind and The Village Casino are popular attractions on the lake during the summer months. Prior to 2018 a popular tourist location was the Bemus Point restaurant, The Italian Fisherman, since re-named "The Fish." Prior to its change in name and ownership, the Italian Fisherman boasted a popular floating stage which hosted an annual summertime concert series. As of 2020 plans were under way to move the floating stage series to Mayville. Visitors can schedule a lake tour or dinner cruise on The Summer Wind, a floating leisure shuttle departs from Celoron at the southern end of the lake. The Summer Wind was damaged in a storm in 2019 and missed the 2020 tourist season awaiting repairs in Celoron. Bemus Point offers The Village Casino, a restaurant and bar that can easily be reached by boat. Boaters are able to tie up at the Casino's dock where waitresses will serve them from their location. This establishment also has historical value in the area and offers nightlife on the lake. Contrary to its name, the Casino does not offer gambling. The Italian Fishermen, also in Bemus Point, offers fine dining and a floating stage during the summer with live bands and events scheduled at various times throughout the warm season.

All content from Kiddle encyclopedia articles (including the article images and facts) can be freely used under Attribution-ShareAlike license, unless stated otherwise. Cite this article:
Chautauqua Lake Facts for Kids. Kiddle Encyclopedia.