The first settlement in the county was at this location in 1804, and the village of Mayville was incorporated in 1830. In 1836 local residents rioted against the Holland Land Company and broke into its office, destroying furniture and papers.

The Pennsylvania Railroad built a train station and pier on the shores of Chautauqua Lake at Mayville. This location, along with the Jamestown boat landing at the south end of the lake, was the main mode of transportation to the rest of the communities around Chautauqua Lake via the large fleet of steamboats operating before the trolley line was constructed. In modern times the steamboat Chautauqua Belle still operates out of Mayville, running between Point Chautauqua, Chautauqua Institution, and the vessel's home port in Mayville.

The Pennsylvania Railroad Station was listed on the National Register of Historic Places in 1993. The Point Chautauqua Historic District was listed in 1996. 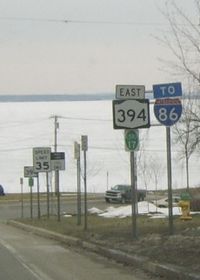 Route 394 along the west side of Chautauqua Lake in Mayville

Mayville is the nearest village to the Chautauqua Institution, which draws thousands of visitors during the summer months. Businesses in the village do a brisk tourist business both with Chautauquans and with visitors to cottages and resorts on the east and west sides of the lake.

According to the United States Census Bureau, the village has a total area of 1.99 square miles (5.16 km2), all of it land.

There were 686 households out of which 27.0% had children under the age of 18 living with them, 44.9% were married couples living together, 9.5% had a female householder with no husband present, and 41.8% were non-families. 36.6% of all households were made up of individuals and 16.8% had someone living alone who was 65 years of age or older. The average household size was 2.22 and the average family size was 2.92.

All content from Kiddle encyclopedia articles (including the article images and facts) can be freely used under Attribution-ShareAlike license, unless stated otherwise. Cite this article:
Mayville, New York Facts for Kids. Kiddle Encyclopedia.