The Three Stooges facts for kids 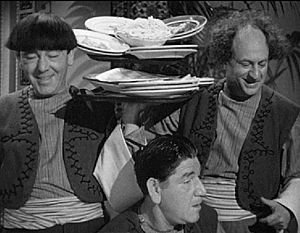 The Three Stooges was a comedy act that made short movies from 1934 to 1970. The Three Stooges used physical comedy to entertain. This form of comedy is called slapstick comedy. The actors were Moe Howard, Larry Fine, Jerome Curly Howard, and Shemp Howard.

All content from Kiddle encyclopedia articles (including the article images and facts) can be freely used under Attribution-ShareAlike license, unless stated otherwise. Cite this article:
The Three Stooges Facts for Kids. Kiddle Encyclopedia.