Lucie Arnaz was born and raised in Los Angeles. She lived for a few years in New York City when she was 10 years old, and attended St. Vincent Ferrer School, along with her brother, Desi Arnaz Jr., and attended the Roman Catholic Immaculate Heart High School.

Arnaz is the daughter of Lucille Ball and Desi Arnaz, and is the sister of actor Desi Arnaz Jr. 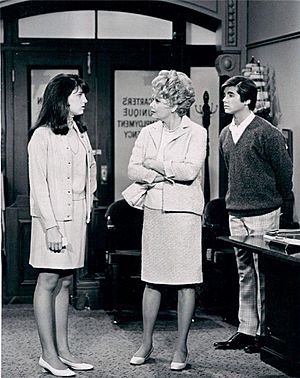 Arnaz, her mother Lucille Ball, and her brother Desi Jr., in Here's Lucy, 1968

Having had walk-on roles on her mother's television series The Lucy Show, Arnaz made her acting debut in a continuing role in the series Here's Lucy from 1968 to 1974. She played Kim Carter, the daughter of the eponymous Lucy—who was played by Arnaz's real-life mother, Lucille Ball.

Arnaz branched out into television roles independent of her family from the mid-1970s. In 1975, she played murder victim Elizabeth Short in an NBC telefilm of Who is the Black Dahlia?, and she starred with Lyle Waggoner and Tommy Tune in Welcome to the "World", The Wonderful World of Disney special commemorating the grand opening of Space Mountain at Walt Disney World in Orlando, Florida. In 1978, she appeared in an episode of Fantasy Island as a woman desperately trying to save her marriage. She has continued to make appearances in a number of popular television series over the years, including Murder, She Wrote, Marcus Welby, M.D., Sons and Daughters (CBS, 1991), and Law & Order.

Arnaz also had a short-lived series of her own, The Lucie Arnaz Show, on CBS in 1985. The reviewer for The New York Times described the show as "the always ingratiating Miss Arnaz as a psychologist who not only writes an advice column, but also takes calls from listeners on her own radio program."

Another eponymous series, this one a late-night-style talk show, aired for one season from 1995 to 1996. It was unsuccessful, but The Rosie O'Donnell Show would use the same format a year later to much greater success, prmpting Arnaz's agent to pitch a revival that would not be picked up.

She won an Emmy Award for Outstanding Informational Special, in 1993 for her documentary about her parents, Lucy and Desi: A Home Movie.

Arnaz also had a lengthy career in musical theatre.

Arnaz made feature-film appearances, including The Jazz Singer (1980) in which she co-starred with Neil Diamond and Laurence Olivier. She earned a nomination for the 1981 Golden Globe Award, Best Supporting Actress in a Motion Picture.

Arnaz has three children together with Luckinbill: Simon, Joseph and Katharine Luckinbill. Luckinbill has two sons from his previous marriage: Nicholas and Benjamin Luckinbill.

Arnaz shared her birthday, July 17, with her mother's brother, Fred Ball. as well as his wife, her aunt Zo Ball.

All content from Kiddle encyclopedia articles (including the article images and facts) can be freely used under Attribution-ShareAlike license, unless stated otherwise. Cite this article:
Lucie Arnaz Facts for Kids. Kiddle Encyclopedia.