Fredericksburg (German: Friedrichsburg) is the seat of Gillespie County, in the U.S. state of Texas. As of the 2010 Census, the city had a population of 10,530.

Fredericksburg was founded in 1846 and named after Prince Frederick of Prussia. Old-time German residents often referred to Fredericksburg as Fritztown, a nickname that is still used in some businesses. The town is also notable as the home of Texas German, a dialect spoken by the first generations of German settlers who initially refused to learn English. Fredericksburg shares many cultural characteristics with New Braunfels, which had been established by Prince Carl of Solms-Braunfels the previous year. Fredericksburg is the birthplace of Fleet Admiral Chester Nimitz. It is the sister city of Montabaur, Germany. On October 14, 1970, the Fredericksburg Historic District was added to the National Register of Historic Places in Texas. 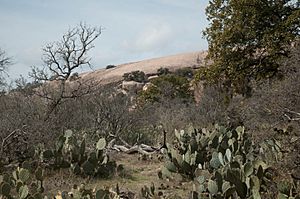 Enchanted Rock is a geographical landmark 17 miles (27 km) north of Fredericksburg in Llano County. The rock is a huge, pink granite exfoliation dome that rises 425 feet (130 m) above the surrounding land, has a summit elevation of 1,825 feet (556 m) above sea level, and covers 640 acres (260 ha). It is one of the largest batholiths (underground rock formation uncovered by erosion) in the United States, and was declared a National Natural Landmark in 1970. In 1994, the State of Texas opened it as Enchanted Rock State Natural Area after adding facilities. The same year, Enchanted Rock was added to the National Register of Historic Places.

Balanced Rock was a famous local landmark that perched atop Bear Mountain 10 mi (16 km) north of Fredericksburg. The natural wonder stone pillar, about the size of a small elephant, precariously balanced on its small tip. It fell prey to vandals who dynamited it off its base in April 1986.

The first known record of Cross Mountain (elevation 1,915 feet (584 m)) was in 1847 by Dr. Ferdinand von Roemer. Native Americans used the location to signal each other about intrusions into their territory. The area was part of settler Dr. John Christian Durst's 10-acre (4.0 ha) allotment. Durst found a timber cross on the mountain, indicating that Spanish missionaries had once used the site. Durst named the place "Kreuzberg" or Cross Mountain. In 1849, Father George Menzel erected a new cross. In 1946, St. Mary's Catholic Church erected a metal and concrete cross. The mountain has been used both for the Easter Fires pageant and for Easter sunrise services. It was designated a Recorded Texas Historic Landmark 1976.

The Vereins Kirche, the Pioneer Museum Complex, Pioneer Memorial Library, and other architecture.

Nimitz Hotel and National Museum of the Pacific War

For more details, see National Museum of the Pacific War

The Fredericksburg-Stonewall area has become known as the Peach Capital of Texas. and Benjamin Lester Enderle is known as the Father of the Hill Country Peach Industry. He was Gillespie County Surveyor and a math and science teacher at Fredericksburg High School when he planted five peach trees and began selling the fruit in 1921. Enderle worked to develop the Hale, Burbank, Elberta, and Stark varieties. He began marketing them through the H-E-B grocery chain, and eventually had 5,000 producing peach trees on 150 acres (61 ha). Growers claim the taste is due to the area having the right combination of elevation, sandy soil, and climate to produce flavorful clingstone and freestone peaches. The fruit ripens May–August, and consumers can either buy picked fruit, or pick their own. 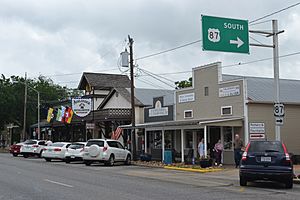 Main Street at Fredericksburg, a Biergarten is along the major street.

Herb farms, grape culture, lavender production and wildflower seeds have become burgeoning businesses in Fredericksburg. Combinations of agribusiness with day spas, wedding facilities, or bed-and-breakfast accommodations are not unusual. Even a Texas Hill Country Lavender Trail has been designated.

Lady Bird Johnson's passion for Texas wildflowers not only lives on in the Lady Bird Johnson Wildflower Center in Austin, but she also sparked a high demand for seed. The 200-acre (81 ha) Wildseed Farms in Fredericksburg was founded by John R. Thomas in 1983 as a result of that high demand, and produces 88 varieties of wildflower seeds. It is the largest family-owned wildflower seed farm in the United States and host of an annual Wildflower Celebration.

Gillespie County Airport (FAA locator T82) is located on State Highway 16 South, about 2 miles (3.2 km) from downtown Fredericksburg, and features a 5,002 ft (1,525 m) long runway and a hotel and diner. The airport was established by Hans Hannemann and Red Schroeder. Prior to 1945, the facility had been owned by the United States Army Air Corps. Transient and long-term hangar rentals are available.

Fredericksburg experiences a humid subtropical climate, with hot summers and a generally mild winters. Temperatures range from 82 °F (28 °C) in the summer to 49 °F (9 °C) during winter.

All content from Kiddle encyclopedia articles (including the article images and facts) can be freely used under Attribution-ShareAlike license, unless stated otherwise. Cite this article:
Fredericksburg, Texas Facts for Kids. Kiddle Encyclopedia.