National Museum of the Pacific War facts for kids

The National Museum of the Pacific War is located in Fredericksburg, Texas, the boyhood home of Fleet Admiral Chester W. Nimitz. Nimitz served as CinCPAC, commander in chief, United States Pacific Fleet, and was soon afterward named commander in chief, Pacific Ocean Areas, during World War II. The six-acre site includes the Admiral Nimitz Museum, which is housed in the old Nimitz Hotel and tells the story of Nimitz beginning with his life as a young boy through his naval career as well as the evolution of the old hotel.

Charles Henry Nimitz, German merchant sailor and grandfather of Fleet Admiral Chester Nimitz, was born in Bremen in Germany. He emigrated to the United States by way of South Carolina in 1844. In 1846, Nimitz moved to Fredericksburg with the initial settlers. In 1848, he married Sophie Dorothea Mueller, and nine of the couple's twelve children lived to adulthood. Local trouble maker James P. Waldrip tried unsuccessfully to recruit Nimitz into Die Haengebande. Charles Nimitz built the Nimitz Hotel in 1852, and deeded it over to his son Charles H. Nimitz, Jr., in 1906. Locals referred to it as the Steamboat Hotel because of the ship's bow front. The hotel had its own saloon and brewery, a ballroom that doubled as a theatre, a smokehouse, and a bath-house. In its heyday, the hotel hosted such guests as Horace Greeley, Johnny Ringo, President Rutherford B. Hayes, General Robert E. Lee, General James Longstreet, General Phil Sheridan, William Sydney Porter and General Ulysses S. Grant.

Anna Henke Nimitz, the wife of his son Chester Bernard Nimitz became pregnant with their only child Chester William Nimitz. The senior Chester died before his son was born on February 24, 1885. Little Chester's grandfather Charles served as a father figure the first five years of his life. In 1890, the widow Nimitz married her husband's brother William Nimitz and moved with him to Kerrville where he managed the St. Charles Hotel. While still a teenager, Chester was accepted for enrollment in the United States Naval Academy, where he graduated seventh out of a class of 114. Chester Nimitz rose to the rank of Commander-in-Chief of the U.S. Pacific Forces in World War II. Fleet Admiral Nimitz died February 20, 1966.

The Nimitz Hotel was designated an historical marker in 1989, marker number 10089. 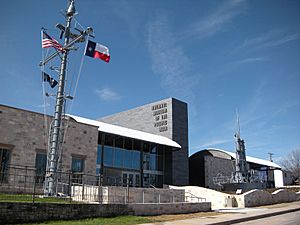 The entrance to the National Museum of the Pacific War

The hotel owned by Nimitz's grandfather Charles Henry Nimitz was restored to its original design and renamed the Admiral Nimitz Museum by an act of the Texas legislature in 1968. The original intent was to focus only as a memorial to Fleet Admiral Chester Nimitz. In 2000, the complex was renamed Admiral Nimitz State Historic Site – National Museum of the Pacific War and is dedicated exclusively to the Pacific Theater battles of World War II. The conning tower and foc'sle of USS Pintado (SS-387) is at the main museum entrance.

The Pacific Combat Zone is a re-creation of a Pacific island battlefield, and includes a Quonset Hut, a PT boat and base, Japanese tank, palm trees, and machine gun placements. Re-enactments, called Living History exhibits, are held throughout the year. The Veterans' Walk of Honor and Memorial Wall can be found within the Memorial Courtyard. Also located at the Pacific Combat Zone, the Quonset Hut now serves as the base for the museum's STEAM Lab.https://www.pacificwarmuseum.org/discover/field-trips/

On May 8, 1976, the 130th anniversary of the founding of Fredericksburg, the Japanese government gifted the museum with the Japanese Garden of Peace. The garden was designed by Taketora Saita as a replica of the private garden of Gensui The Marquis Tōgō (1848–1934), the main Imperial Japanese Navy commander in the Russo-Japanese War. Fleet Admiral Nimitz personally admired the Marquis Tōgō, having previously helped to establish a war memorial to the Japanese admiral. 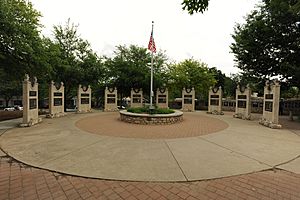 Plaza of the Presidents on the Museum grounds

George H.W. Bush cut the ribbon in 1991 for the $3 million gallery bearing his name. The George H.W. Bush Gallery is home to an I.J.N. Ko-hyoteki class midget submarine (which participated in the attack on Pearl Harbor), a Japanese Kawanishi N1K "Rex" floatplane, and an American North American B-25 Mitchell. In 1991, the land for the Bush Gallery was bought from H-E-B Grocery. Money for the gallery was privately raised in the 1990s through the efforts of finance chairman Lee Bass and a board that included baseball star Nolan Ryan and Ernest Angelo, a former mayor of Midland. Admission tickets cover both museums. In addition, the museum is currently home to the PT boat PT-309.

Bush later reflected that "terrifying experiences" of war helped him to become a man: "I have often wondered why me, why was I spared when others died."

On December 7, 2009, the museum hosted the Grand Reopening of the newly expanded George H. W. Bush Gallery where the second floor houses the Nimitz Education and Research Center. Former President George H. W. Bush his wife Barbara, along with Texas Governor Rick Perry, cut the ribbon. The ceremony was attended by survivors of the Attack on Pearl Harbor, and drew a crowd of 5,000 people.

All content from Kiddle encyclopedia articles (including the article images and facts) can be freely used under Attribution-ShareAlike license, unless stated otherwise. Cite this article:
National Museum of the Pacific War Facts for Kids. Kiddle Encyclopedia.