Clark Terry (December 14, 1920 – February 21, 2015) was an American swing and bebop trumpeter, a pioneer of the flugelhorn in jazz, educator, and NEA Jazz Masters inductee.

He played with Charlie Barnet (1947), Count Basie (1948–51), Duke Ellington (1951–59), Quincy Jones (1960), and Oscar Peterson (1964-96). He was also with The Tonight Show Band from 1962 to 1972. Terry's career in jazz spanned more than 70 years, during which he became one of the most recorded jazz musicians ever, appearing on over 900 recordings. Terry also mentored many musicians including Quincy Jones, Miles Davis, Herbie Hancock, Wynton Marsalis, Pat Metheny, Dianne Reeves, and Terri Lyne Carrington among thousands of others.

Terry was born to Clark Virgil Terry Sr. and Mary Terry in St. Louis, Missouri, on December 14, 1920. He attended Vashon High School and began his professional career in the early 1940s, playing in local clubs. He served as a bandsman in the United States Navy during World War II. His first instrument was valve trombone.

In February 2004, Terry guest starred as himself, on Little Bill, a children's television series. Terry was a resident of Bayside, Queens, and Corona, Queens, New York, later moving to Haworth, New Jersey, and then Pine Bluff, Arkansas.

His autobiography was published in 2011 and, as Taylor Ho Bynum writes in The New Yorker, "captures his gift for storytelling and his wry humor, especially in chronicling his early years on the road, with struggles through segregation and gigs in juke joints and carnivals, all while developing one of most distinctive improvisational voices in music history."

In April 2014, a documentary Keep on Keepin' On, follows Clark Terry over four years to document the mentorship between Terry, and 23-year-old blind piano prodigy Justin Kauflin, as the young man prepares to compete in an elite, international competition.

According to his own website Terry was "one of the most recorded jazz artists in history and had performed for eight American Presidents."

On February 13, 2015, it was announced that Terry had entered hospice care to manage his advanced diabetes. He died on February 21, 2015.

Writing in The New York Times, Peter Keepnews said Terry "was acclaimed for his impeccable musicianship, loved for his playful spirit and respected for his adaptability. Although his sound on both trumpet and the rounder-toned flugelhorn (which he helped popularize as a jazz instrument) was highly personal and easily identifiable, he managed to fit it snugly into a wide range of musical contexts."

Writing in UK's The Daily Telegraph, Martin Chilton said: "Terry was a music educator and had a deep and lasting influence on the course of jazz. Terry became a mentor to generations of jazz players, including Miles Davis, Wynton Marsalis and composer-arranger Quincy Jones."

Interviewing Terry in 2005, fellow jazz trumpeter Scotty Barnhart said he was "... one of the most incredibly versatile musicians to ever live ... a jazz trumpet master that played with the greatest names in the history of the music ..." 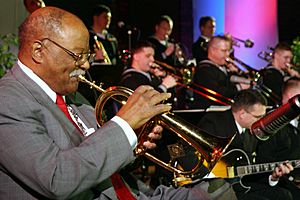 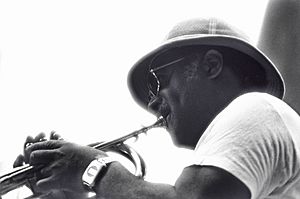 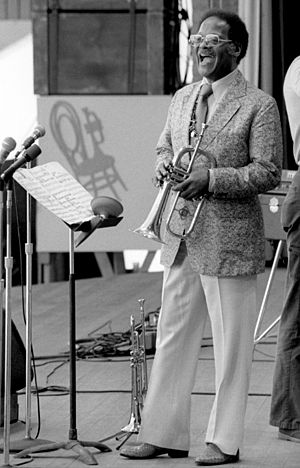 Terry at the 1981 Monterey Jazz Festival

Over 250 awards, medals and honors, including:

All content from Kiddle encyclopedia articles (including the article images and facts) can be freely used under Attribution-ShareAlike license, unless stated otherwise. Cite this article:
Clark Terry Facts for Kids. Kiddle Encyclopedia.