The Wright brothers, Orville Wright (August 19, 1871 – January 30, 1948) and Wilbur Wright (April 16, 1867 – May 30, 1912), designed, built, and flew the first controlled, powered, heavier-than-air airplane on December 17, 1903. They had been experimenting for many years with gliders and other vehicles before their first powered flight. They are also known for making the first way to steer an airplane. They designed the aircraft in Dayton, Ohio, and their first test flight was in Kitty Hawk, North Carolina.

The Wrights grew up in Dayton, Ohio. They were sons of a minister. There were many books in their house, and they were encouraged to ask questions and find out about whatever they thought was interesting. Sometimes their father would ask them to argue for a topic, then switch sides and argue for the opposite point of view.

Learning how to fly

By the 1890s, the Wrights were interested in flight, especially the gliders of Otto Lilienthal. They started working on making airplanes in their bicycle shop. They thought controlling a plane was one of the big problems of flight. Lilienthal and others had been killed when they could not control their aircraft. The Wright brothers fixed the problem by inventing control surfaces, such as a rudder that would work in the air. They built wings that could be twisted a little and moved up and down slightly, to control flight. They called this steering system wing-warping.

From 1900 to 1902, they built gliders in Dayton and tested them in Kitty Hawk, where there were strong and steady winds. They also made small versions of the wings and built a wind tunnel for model airplanes to test how well different wing shapes would lift an airplane.

In 1903, they built a powered airplane that had propellers and a small engine. The Wright Flyer airplane first flew successfully on December 17, 1903, near Kitty Hawk, North Carolina. This was the first time people ever flew a powered airplane they could control. Before that, people flew in balloons or gliders, or for a very short time in planes they could not control. The two brothers continued to make changes to their design and had a very good plane by 1905. 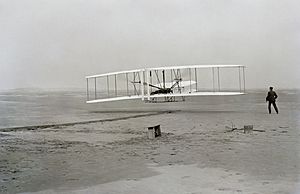 First flight of the Wright Flyer I, December 17, 1903 - Orville Wright at the controls and Wilbur Wright running beside it.

The Wright Brothers kept their discovery largely secret for a couple of years, until they showed it to the world in 1908 (They had filed a patent on their steering system March 23, 1903.)

After that, they started a company to build airplanes. They had a patent war with Glenn Curtiss, filing lawsuits against each other over who really invented the airplane steering system. The Wrights believed that Curtiss' aileron system was too similar to their own steering system and that he had copied them. During the patent war, Wilbur died. Orville continued working to keep his reputation as the first man to fly. Later he sold the airplane company and became an elder statesman of aviation. He died in 1948.

Ohio 50 State Quarter features a photo of the 1905 Wright Flyer III, built and flown in Ohio, as well as Neil Armstrong 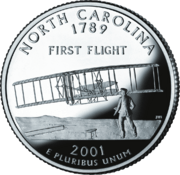 The U.S. states of Ohio and North Carolina both take credit for the Wright brothers and their world-changing inventions—Ohio because the brothers developed and built their design in Dayton, and North Carolina because Kitty Hawk was the site of the Wrights' first powered flight. With a spirit of friendly rivalry, Ohio adopted the slogan "Birthplace of Aviation" (later "Birthplace of Aviation Pioneers", recognizing not only the Wrights, but also astronauts John Glenn and Neil Armstrong, both Ohio natives). The slogan appears on Ohio license plates. North Carolina uses the slogan "First In Flight" on its license plates.

The site of the first flights in North Carolina is preserved as Wright Brothers National Memorial, while their Ohio facilities are part of Dayton Aviation Heritage National Historical Park. As the positions of both states can be factually defended, and each played a significant role in the history of flight, neither state has an exclusive claim to the Wrights' accomplishment.

Notwithstanding the competition between those two states, in 1937 the Wrights' final bicycle shop and home were moved from Dayton to Greenfield Village in Dearborn, Michigan, where they remain.

All content from Kiddle encyclopedia articles (including the article images and facts) can be freely used under Attribution-ShareAlike license, unless stated otherwise. Cite this article:
Wright brothers Facts for Kids. Kiddle Encyclopedia.