Awarded the Presidential Medal of Freedom in 2004

Rita Moreno (born December 11, 1931) is a Puerto Rican dancer, singer and actress. She is one of the few performers who have won an Emmy, a Grammy, an Oscar, a Golden Globe, and a Tony Award. In 2014 she was honored with a Screen Actors Guild Award for lifetime achievement. She has won numerous other awards and the Presidential Medal of Freedom, America's highest civilian honor.

She is also widely known for the role of the matriarch Lydia Margarita del Carmen Inclán Maribona Leyte-Vidal de Riera in the 2017 remake of One Day at a Time.

Moreno had an eight-year-long affair with actor Marlon Brando when he was young. She also dated Elvis Presley. 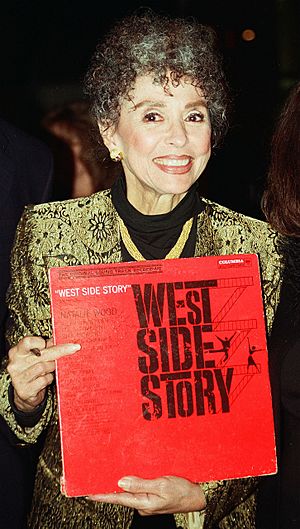 All content from Kiddle encyclopedia articles (including the article images and facts) can be freely used under Attribution-ShareAlike license, unless stated otherwise. Cite this article:
Rita Moreno Facts for Kids. Kiddle Encyclopedia.