Humacao is a municipality in Puerto Rico located in the eastern coast of the island, north of Yabucoa; south of Naguabo; east of Las Piedras; and west of Vieques Passage. Humacao is spread over 10 wards and Humacao Pueblo (The downtown area and the administrative center of the city). It is part of the San Juan-Caguas-Guaynabo Metropolitan Statistical Area. 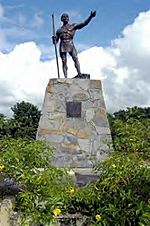 The region of what is now Humacao belonged to the Taíno region of Jumaca, which covered a portion of the southeast coast of Puerto Rico. The region was led by cacique Jumacao (also referred to as "Macao"). The Taíno settlement was located on the shores of what is called now the Humacao River. It is believed that the Taíno chief Jumacao was the first "cacique" to learn to read and write in Spanish, since he wrote a letter to the King of Spain Charles I complaining about how the Governor of the island wasn't complying with their peace agreement. In the letter, Jumacao argued that their people were virtually prisoners of Spain. It is said that King Charles was so moved by the letter that he ordered the Governor to obey the terms of the treaty.

During the early 16th Century, the region was populated by cattle ranchers. However, since most of them officially resided in San Juan, a settlement was never officially organized. At the beginning of the 18th Century, specifically around 1721–1722, the first official settlement was constituted in the area. Most of the residents at the time were immigrants from the Canary Islands, but due to attacks from Caribs, pirates, and other settlers, some of them moved farther into the island in what is now Las Piedras. Still, some settlers remained and by 1776, historian Fray Íñigo Abbad y Lasierra visited the area and wrote about the population there. By 1793, the church was recognized as parish and the settlement was officially recognized as town.

By 1894, Humacao was recognized as a city. Due to its thriving population, buildings and structures like a hospital, a theater, and a prison were built in the city. In 1899, after the United States invasion of the island as a result of the Spanish–American War, the town of Las Piedras was annexed to Humacao. This lasted until 1914, when the Legislative Assembly of Puerto Rico voted on splitting both towns again.

Recently, Humacao has been led by mayor Marcelo Trujillo Panisse for more than a decade. A basketball star in his early years, Trujillo has pushed for the development of infrastructure facilities for sports and the fine arts in the city. On March, 2008, a new Roman Catholic diocese was established as the Fajardo-Humacao diocese. Its first bishop is Monsignor Eusebio 'Chebito' Ramos Morales, a maunabeño who was rector of the Humacao's main parish in the 1990s.

Humacao is located in the southeast coast of Puerto Rico. It is bordered by the municipalities of Naguabo to the north, Yabucoa to the south, and Las Piedras to the west. The Atlantic Ocean borders the city in the east. Humacao is located in the region of the Eastern Coastal Plains, with most of its territory being flat. There are minor elevations to the southwest, like Candelero Hill, and northwest, like Mabú. Humacao's territory covers 45 square miles (117 km2). Two islands belong to Humacao: Cayo Santiago and Cayo Batata.

Humacao's hydrographic system consists of many rivers and creeks like Humacao, Antón Ruíz, and Candelero. Some of its creeks are Frontera, Mariana, and Del Obispo, among many others.

Humacao is divided into thirteen barrios or wards:

Due to its location on the coast and relative short distance from the capital, Humacao is a frequent stop for tourists. One of the most notable tourist mainstays is the Palmas del Mar resort, which is the island's largest resort. This megaresort is composed of over 3,000 acres (12 km2) of land and occupies the entire south eastern portion of the municipal territory. The resort contains over 20 tennis courts, two world-class golf courses, beaches, several restaurants and a riding center.

Aside of the beaches in Palmas del Mar resort, Humacao has several other popular beaches. Among the most popular ones are Punta Santiago, Buena Vista, Punta Candelero, and El Morrillo.

Other landmarks from Humacao are the Astronomical Observatory in the University of Puerto Rico at Humacao, Casa Roig, the Guzmán Ermit, the Wildlife Refuge, and the Church Dulce Nombre de Jesús. 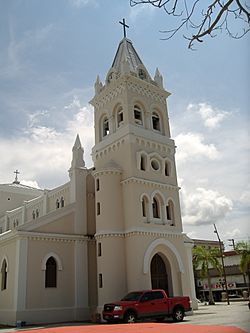 The Fiesta patronal dedicated to the Immaculate Conception is held at the beginning of December. It has lost most of its religious content to become a popular festival with live music, food, drinks and verbenas.

The Breadfruit Festival (Festival de la Pana) is celebrated during the first weekend of September. It is organized by the Mariana's Recreational and Cultural Association (ARECMA), a community organization of the Barrio Mariana. Its main theme is about the preparation of dishes whose main ingredient is breadfruit. Typical Puerto Rican music, crafts and foods as well as other cultural and sports activities can also be enjoyed. Most years it has been held at one of the highest places of the sector with a spectacular view to Humacao, Las Piedras, Naguabo, Vieques and Yabucoa.

The Grises basketball team (Humacao Grays), founded in 2005, belongs to Puerto Rico's National Superior Basketball league. In 2010, they changed their name to the Caciques de Humacao. They play on the new Humacao Coliseum.

It consists of three horizontal stripes: gold that stands for Chief Jumacao's crown, red that symbolizes the Coat of Arms and the green that represents the arrows used by the Taínos.

The coat of arms consists of two colors, gold and green. The gold represents the sun, Humacao is located in the island were the sun rises. Green symbolizes the native Indian heritage as well as the natural tropical valley where the city is located. The shield itself represents Humacao's native and Indian name origin.

Humacao's airport is no longer used for daily flights to Vieques and Culebra as it was in the past. It is now used for private flights.

Humacao is served by two freeways and one tolled expressway, therefore is one of a few cities in Puerto Rico with good access. Puerto Rico Highway 30, Autopista Cruz Ortiz Stella, serves as the main highway coming from the west (Caguas, Las Piedras), while Puerto Rico Highway 53 serves from the north (Fajardo, Naguabo) and south (Yabucoa). Puerto Rico Highway 60, the Carretera Dionisio Casillas, is a short freeway located entirely in Humacao, and has exits serving downtown Humacao and Anton Ruiz.

Puerto Rico Highway 3, the main highway bordering the east coastline of Puerto Rico from San Juan, passes through Humacao and has its only alt route in the town, known locally as the Bulevar del Rio (River Boulevard) where it has access to the main judiciary center of the city, as well as a future theatre that is being built, the Centro de Bellas Artes de Humacao (Humacao Fine Arts Center). The alt route allows people to pass by the downtown area, as PR-3 enters into the downtown and business center of the town.

Puerto Rico Highway 908 is another important highway, which begins at PR-3 and intersects PR-30 and has access to the University of Puerto Rico at Humacao, as well as some main schools.

Humacao, together with San Juan and Salinas, is one of three municipalities in Puerto Rico that has controlled-access highways leaving its boundaries in all directions (in this case north to Naguabo and south to Yabucoa via PR-53 and west to Las Piedras via PR-30)

All content from Kiddle encyclopedia articles (including the article images and facts) can be freely used under Attribution-ShareAlike license, unless stated otherwise. Cite this article:
Humacao, Puerto Rico Facts for Kids. Kiddle Encyclopedia.