Kids Encyclopedia Facts
This page is about a Municipality located in Puerto Rico. For other places with a similar name, see Salinas (disambiguation).

Salinas (Salines) is a municipality in the southern part of Puerto Rico located in the southern coast of the island, south of Aibonito and Cayey; southeast of Coamo, east of Santa Isabel; and west of Guayama. Salinas is spread over 7 wards and Salinas Pueblo (the downtown area and the administrative center of the city).

It has long been a fishing spot for Puerto Ricans, known for its beaches, fish variety and the birthplace of the famous "mojito isleño". 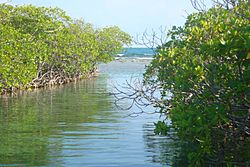 On a green rectangular field, five white isosceles triangles equal in size, placed in the center of the flag and forming a row that covers the extent of the background. The green represents the land and the triangles hills of salt from which the name of the town is derived.

The shield uses the traditional colors of the town; green and silver. The salt knolls indicate in graphical form the name of the town: Salinas. The fish refer to the fishing. The sugar cane leaves that surround the shield, symbolize the sugar cane plantations.

All content from Kiddle encyclopedia articles (including the article images and facts) can be freely used under Attribution-ShareAlike license, unless stated otherwise. Cite this article:
Salinas, Puerto Rico Facts for Kids. Kiddle Encyclopedia.