Cayey is a mountain municipality in central Puerto Rico located on the Central Mountain range, north of Salinas and Guayama; south of Cidra and Caguas; east of Aibonito and Salinas; and west of San Lorenzo. Cayey is spread over 21 wards plus Cayey Pueblo, the downtown area and the administrative center of the city. It is part of the San Juan-Caguas-Guaynabo Metropolitan Statistical Area.

Cayey is notable for its surrounding mountains. The city has been actively growing since the 1990s, evidenced by its designation as a Metropolitan Area by the U.S. Census Bureau. It has experienced significant growth in commerce, and many major retailers, such as Wal-Mart have opened stores in the city. Industries in Cayey include sugar, tobacco and poultry. For tobacco there is a well known company called Consolidated Cigar Corp. A new coliseum and hospital facilities have also been built. Coca-Cola is a major corporation that has a manufacturing facility in the town. Cayey is also host to one of the campuses of the University of Puerto Rico, the University of Puerto Rico at Cayey. 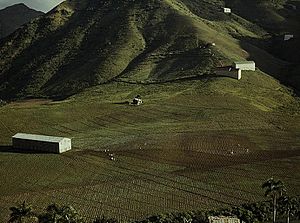 Cayey was founded on August 17, 1773, by Juan Mata Vázquez, who became its first mayor. It is said that Cayey derives its name from the Taino Indian word for "a place of waters". Its original name was "Cayey de Muesas" in honor of Miguel de Muesas, the then governor of Puerto Rico. The town is located in a valley nestled between Puerto Rico's Cordillera Central mountain range and the Sierra de Cayey at roughly the midpoint of routes PR-1 and PR-52. The routes lead to a road that provides a panoramic view of the island.

Cayey's economy has and remains agriculturally based on tobacco, sugar cane and general fruits. Unfortunately, its agricultural economy that evolved starting in the 1950s has diminished considerably to date. Most of its agricultural products are imported from other islands in the Caribbean or mainland United States.

During the first half of the 20th century, Cayey was basically an agricultural area of small farmers and local haciendas dedicated to the farming of crops for the local market. During the 1920s and 1930s farmers increasingly lost their land to absentee landowners, mostly American companies, that turned to the cultivation of sugar cane and, to a lesser extent, tobacco for export. In the 1950s and 1960s some manufacturing concerns established plants in Cayey taking advantage of tax incentives offered by "Operation Bootstrap", Puerto Rico's industrialization program.

An industrial base, in 1947 Cayey saw the beginning of industrial entrepreneurship. There were three factories in town, the Caribe Flower Co. in the Palo Seco neighborhood, a Baseball Factory in the Toita neighborhood, and a Uniform Factory in the back of the High School. These factories employed mostly females. By 1950 the men that worked agriculture became excess population and began migrating to the United States or join the military. In 1950 with the approval of Fomento Industrial and Operation Bootstrap there was a boom of light factories in Cayey. The Gordonshire Knitting Mill in the Guayama road had twelve large buildings and ran two shifts with more than 1,000 employees, and the Consolidated Cigar Corporation across from the road from the Reparto Montellano neighborhood operated three shifts employing over 2,500 from Cayey and surrounding towns.

An education base began in the early to mid-1950s when the Inter-American University opened a branch in Cayey providing teacher training through a night class scheme. In 1967 the University of Puerto Rico opened a campus in the former Henry Barracks Military Reservation, and in the early 1980s El Turabo University, subsidiary of the Ana G. Mendez conglomerate opened a campus in the old Tabaco Factory at the entrance of town. The Interamerican University will be opening a Graduate campus in front of the Plaza (Center of town), and there are conversations with a foreign educational concern to open a technology campus using the buildings left over by the Gordonshire Knitting Mills. There are three major private schools: Radians School, the long established Colegio de Nuestra Senora de la Merced and La Milagrosa School. Cayey's health care base expanded in the mid-1960s with the Mennoite Medical Center and a Municipal Hospital along with laboratories, and urgent care centers that cater to the poor and the elderly.

With the construction of the Interstate (route 52), Cayey has evolved into a "bedroom community" with gated housing developments, located just 30 minutes away from San Juan and 45 minutes away from Ponce. With pleasant weather and good private schools, Cayey has become a premium location for the affluent.

Henry Barracks Military Reservation was a lifeline for the residents of Cayey from 1901 to 1966, when it was declared excess land and passed to the General Services Administration for decommission. The property consisted of 439.92 acres. The property was divided into three prominent encampments: the Spanish Camp- Campamento Español (15 acres), Camp Henry or Henry Barracks, the Home of the third Battalion of the 65th Inf. Regiment that consisted of 372 acres, and 67 acres the Cayey Naval Radio Station (67 acres) ). This reservation is situated in the east of the town of Cayey. The Spanish Reservation containing an area of approximately 15 acres, known as Hospital Hill was set apart by Executive Order of June 30, 1903, under an Act of Congress approved on July 7, 1902. The main army post was located in the northern part of the reservation, initially housing the Puerto Rico Volunteer Infantry Regiment.

The combined posts had approximately 1200 men who used the resources provided by the town people. Families moved into Punta Brava and Vieques neighborhoods. A laundry, show shop, and other smaller stores were located right outside the gate. By 1906 about 350 civilians had jobs in the two posts (Camp Henry and The Cayey Navy Radio Station).

The U.S. Department of the Navy submitted a proposal to raise three 620 feet tall masts as part of a global radio communication linkage. In 1916 the Department of the navy approved a budget of $40,000. At the time 300 men were hired to build the facility for a period of two year, the project was completed in 1918

On September 11, 1928, a category five hurricane called San Felipe destroyed the temporary buildings at Henry Barracks, and the Navy Radio Station. A radio message was sent from the Cayey Navy Radio Station on 18 Sept 1928 to follow “All buildings Henry Barracks destroyed by hurricane September 13th”. The Navy left Cayey and moved its station to Isla Grande and Stop 7 ½ in Puerto de Tierra. All the land held by the Navy included Magazine Hill (known in the community as "El Polvorin"), which was taken over by the U. S. Army. The 65th Infantery Regiment remained in the north side of the post. The south side was converted into two 1,000 feet shooting ranges The decision was made to reconstruct all building for the regiment in the north side in concrete One hundred and ninety buildings were completed, to include the north side of Henry Barracks. Over 600 men were hired for a period of three years to work in these projects. During this period three large barrack buildings were constructed. The two one company barracks each had its own mess hall and kitchen and was occupied by an infantry company each. The two companies barrack located in the center of the quad occupied the Battalion Headquarters Co. and the Machine Gun Co.

By 1953, the U.S. Department of the Army had reached the conclusion that Henry Barracks would be closed in the near future. A full complement of maintenance personnel composed of professional, technical, and daily laborers were maintained in the Reservation. The growth of three major housing developments is evidence of the economic impact of the Reservation (Reparto Montellano, El Polvorin, Urbanización Aponte) While the all-Puerto Rican 65th Inf regiment would never return to its home base, several other initiatives were undertaken, which had a direct impact on the economic development of the town and the region, one such initiatives was the commissioning of the Caribbean Signal Agency in 1959. Over the coming years several tenants occupied the lands comprised by the Henry Barracks Military Reservation, among them: These activities are as follow: 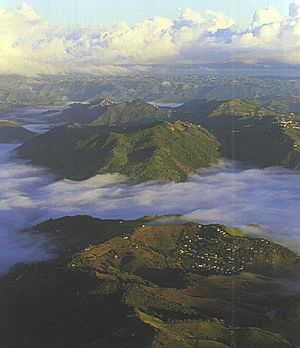 Cayey is located in a valley surrounded by La Sierra de Cayey, a mountain range where the Carite Forest Reserve is located, and the Cordillera Central, a mountain range that covers most of the central part of Puerto Rico. Because of its location, Cayey is known for its mountains, its cool weather and its misty mornings, especially in winter. During Spanish colonial rule, Spanish soldiers assigned to Puerto Rico were sent to Cayey, whose cool weather resembled that of Spain, while they became acclimated to the tropical weather. In winter, it is not unusual for the temperature to drop into the 50s °F. 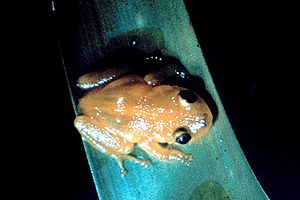 The golden coquí (Eleutherodactylus jasperi; Spanish: coquí dorado) is a rare and possibly extinct leptodactylid frog species endemic to Puerto Rico. Native from Cayey, Puerto Rico, golden coquís have only been found in areas of dense bromeliad growth in the Sierra de Cayey of Puerto Rico between 647 and 785 metres above sea level. They get their name from the song the male coquis sing at night. It sounds like "cokee, cokee" so that is why they are called coqui in Spanish. The golden coqui is the smallest of the coqui frogs in Puerto Rico. Mature adult coquis are only roughly the size of a dime. Male coquis are more bright yellow where females tend to be more light yellow and brown. The golden coqui is the only frog species in the New World known to give birth to live young. These frogs are known around the whole island of Puerto Rico. 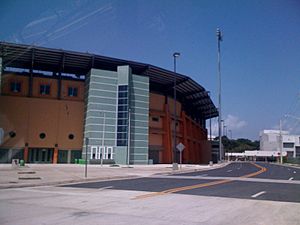 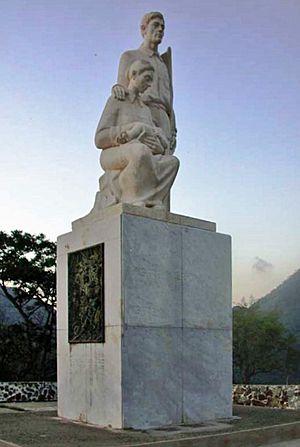 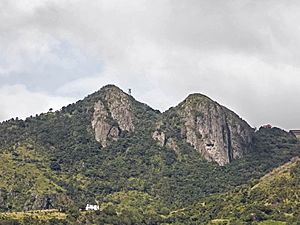 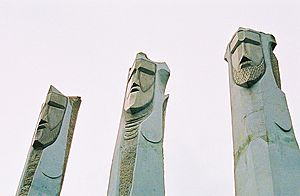 Monument to The Three Kings in Guavate.

The flag derives its design and colors from the Coat of Arms, which is in the center of the flag encircled by a solid black ring. The centered Coat of Arms and has four triangles pointing to it, two white and two red.

The coat of arms has a three tip mountain, a red bull, and a waving blue stripe representing the abundant water in the zone and also in reverence to the primitive matron of the town of Cayey. The shield is topped with the silver lamb symbol of San Juan of Puerto Rico, and a red book.

All content from Kiddle encyclopedia articles (including the article images and facts) can be freely used under Attribution-ShareAlike license, unless stated otherwise. Cite this article:
Cayey, Puerto Rico Facts for Kids. Kiddle Encyclopedia.