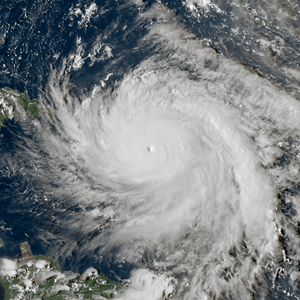 Hurricane Maria was a severe Atlantic tropical cyclone in September 2017 which ended in early October 2017.

It was the 13th named storm, 8th hurricane, 5th major hurricane, and a 2nd Category 5 hurricane of the hyperactive 2017 Atlantic hurricane season.

At her peak, Maria had maximum sustained winds of 175 miles per hour. The storm brushed the Eastern United States.

Tropical storm and hurricane notices were posted from Dominican Republic to the Windward Islands.

The damage from Hurricane Maria was inflicted at $90 billion, especially in Puerto Rico after it made a direct hit and landfall in Puerto Rico as a high-end Category 4 hurricane.

Due to the large number of deaths and amounts of damage it caused especially in Puerto Rico, the name Maria was retired in April 2018 by the World Meteorological Organization, and it was replaced with Margot for the 2023 Atlantic hurricane season.

All content from Kiddle encyclopedia articles (including the article images and facts) can be freely used under Attribution-ShareAlike license, unless stated otherwise. Cite this article:
Hurricane Maria Facts for Kids. Kiddle Encyclopedia.