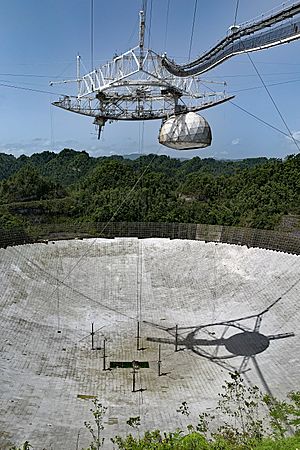 Arecibo radio telescope before it's collapse in December 2020

The Arecibo Observatory is an observatory in Arecibo, Puerto Rico. It is part of the National Astronomy and Ionosphere Center (NAIC). The observatory has a 305 m (1,000 ft) spherical reflector dish built into a natural sinkhole.

For more than 50 years, the Arecibo Observatory had the world's largest single telescope until the Five hundred meter Aperture Spherical Telescope (FAST) in China was built in 2016.

The observatory was damaged by Hurricane Maria in 2017. It was affected by earthquakes in 2019 and 2020. Two cable breaks, one in August 2020 and a second in November 2020, damaged the dish. This caused concern that the telescope might collapse.

The National Science Foundation announced on November 19, 2020 that it would decommission and dismantle the telescope. However, it collapsed on December 1, 2020.

All content from Kiddle encyclopedia articles (including the article images and facts) can be freely used under Attribution-ShareAlike license, unless stated otherwise. Cite this article:
Arecibo Observatory Facts for Kids. Kiddle Encyclopedia.