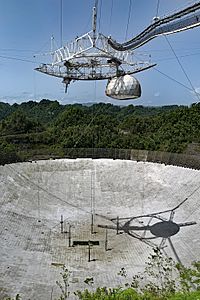 The Arecibo Telescope was a 305 m (1,000 ft) spherical reflector dish built into a natural sinkhole at the Arecibo Observatory which was completed in November 1963.

For more than 50 years, the Arecibo Telescope was the world's largest single-aperture telescope, surpassed in July 2016 by the Five-hundred-meter Aperture Spherical Telescope (FAST) in China.

All content from Kiddle encyclopedia articles (including the article images and facts) can be freely used under Attribution-ShareAlike license, unless stated otherwise. Cite this article:
Arecibo Telescope Facts for Kids. Kiddle Encyclopedia.