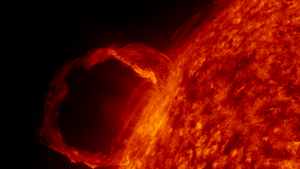 In astronomy, first light is the first time a telescope is used to look at the Universe. This is often not the first time the telescope has been used. Tests will have been done during daylight to make sure everything is working. Images taken during first light are not normally of scientific interest. They are usually poor quality as the parts of the telescope have not been properly adjusted for best performance. Usually, a well-known and spectacular astronomical object is chosen. First light is always a moment of great excitement, both for the people who designed and built the telescope, and for the astronomical community.

For example, the 200-inch Hale Telescope saw first light January 26, 1949, targeting a nebula located in the constellation Monoceros. under the direction of American astronomer Edwin Hubble. The image was published in many magazines.

The Large Binocular Telescope had its first light with a single primary mirror on October 12, 2005. This was a view of NGC 891, a spiral galaxy in the Andromeda constellation . The second mirror was installed in January 2006 and the telescope became fully operational in January 2008.

In physical cosmology, first light refers to the light coming from the first generation of hyperstars. These were formed less than a billion years after the big bang, bringing an end to the cosmological Dark Ages.

All content from Kiddle encyclopedia articles (including the article images and facts) can be freely used under Attribution-ShareAlike license, unless stated otherwise. Cite this article:
First light (astronomy) Facts for Kids. Kiddle Encyclopedia.