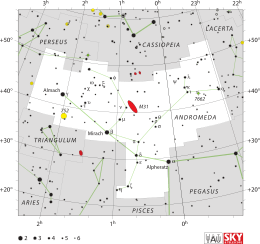 Andromeda is a constellation in the northern sky. It is named after the princess Andromeda in Greek mythology. It is sometimes called "Princess of Ethiopia" or "the Chained Woman" in English. It has also been called Persea ("Perseus's wife") or Cepheis ("Cepheus's daughter"). The astronomer named Ptolemy listed Andromeda when he made a list of 48 constellations. It is also one of the 88 constellations made by the International Astronomical Union.

All content from Kiddle encyclopedia articles (including the article images and facts) can be freely used under Attribution-ShareAlike license, unless stated otherwise. Cite this article:
Andromeda (constellation) Facts for Kids. Kiddle Encyclopedia.