Cassiopeia is a constellation in the northern sky, named after the vain queen Cassiopeia in Greek mythology, who boasted about her unrivalled beauty. Cassiopeia was one of the 48 constellations listed by the 2nd-century Greek astronomer Ptolemy, and it remains one of the 88 modern constellations today. It is easily recognizable due to its distinctive 'W' shape, formed by five bright stars. It is opposite the Big Dipper. In northern locations above latitude 34ºN it is visible year-round and in the (sub)tropics it can be seen at its clearest from September to early November. Even in low southern latitudes below 25ºS it can be seen low in the North.

At magnitude 2.2, Alpha Cassiopeiae, or Schedar, is generally the brightest star in Cassiopeia, though is often shaded by Gamma Cassiopeiae, which has brightened to magnitude 1.6 on occasion. The constellation hosts some of the most luminous stars known, including the yellow hypergiants Rho Cassiopeiae and V509 Cassiopeiae and white hypergiant 6 Cassiopeiae. The semiregular variable PZ Cassiopeiae is one of the largest known stars. In 1572, Tycho Brahe's supernova flared brightly in Cassiopeia. Cassiopeia A is a supernova remnant and the brightest extrasolar radio source in the sky at frequencies above 1 GHz. Fourteen star systems have been found to have exoplanets, one of which—HR 8832—is thought to host seven planets. A rich section of the Milky Way runs through Cassiopeia, containing a number of open clusters, young luminous galactic disc stars, and nebulae. IC 10 is an irregular galaxy that is the closest known starburst galaxy and the only one in the Local Group of galaxies. 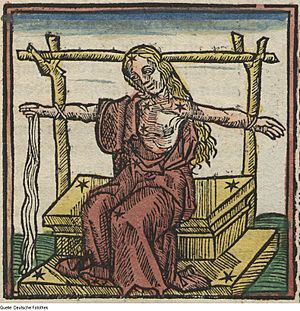 The constellation is named after Cassiopeia, the queen of Aethiopia. Cassiopeia was the wife of King Cepheus of Aethiopia and mother of Princess Andromeda. Cepheus and Cassiopeia were placed next to each other among the stars, along with Andromeda. She was placed in the sky as a punishment after enraging Poseidon with the boast that her daughter Andromeda was more beautiful than the Nereids or, alternatively, that she herself was more beautiful than the sea nymphs. She was forced to wheel around the North Celestial Pole on her throne, spending half of her time clinging to it so she does not fall off, and Poseidon decreed that Andromeda should be bound to a rock as prey for the monster Cetus. Andromeda was then rescued by the hero Perseus, whom she later married.

Cassiopeia has been variously portrayed throughout her history as a constellation. In Persia, she was drawn by al-Sufi as a queen holding a staff with a crescent moon in her right hand, wearing a crown, as well as a two-humped camel. In France, she was portrayed as having a marble throne and a palm leaf in her left hand, holding her robe in her right hand. This depiction is from Augustin Royer's 1679 atlas.

In the ancient Celtic world Anu was the mother goddess and considered to be the mother of all the gods; the Tuatha de Danann. Other references say that she is the mother earth goddess or the Goddess of fertility. On the Cork Kerry border are two mountains called the Paps of Anu (pap is another word for breast.) On the top of each mountain are stone structures or cairns that when viewed from a distance make the two mountains look like a pair of breasts. Anu was known, in the Celtic World, by several similar names: Danu or Don being the most popular alternatives. She was a Mother-Goddess, the wife of the Sun God, Belenos, and considered to be the ancestor of all the Gods, the Tuatha dé Danann, who found themselves obliged to reside in the Otherworld when Miled brought the Celts to the British Isles. She still looks down on us from the night's sky where she appears as Llys Don, better known as the constellation of Casseopeia.

Covering 598.4 square degrees and hence 1.451% of the sky, Cassiopeia ranks 25th of the 88 constellations in area. It is bordered by Cepheus to the north and west, Andromeda to the south and west, Perseus to the southeast and Camelopardalis to the east, and also shares a short border with Lacerta to the west.

The three-letter abbreviation for the constellation, as adopted by the International Astronomical Union in 1922, is 'Cas'. The official constellation boundaries, as set by Eugène Delporte in 1930, are defined by a polygon of 30 segments. In the equatorial coordinate system, the right ascension coordinates of these borders lie between 00h 27m 03s and 23h 41m 06s, while the declination coordinates are between 77.69° and 46.68°. Its position in the Northern Celestial Hemisphere means that the whole constellation is visible to observers north of 12°S. High in the northern sky, it is circumpolar (that is, it never sets in the night sky) to viewers in the British Isles, Canada and the northern United States. 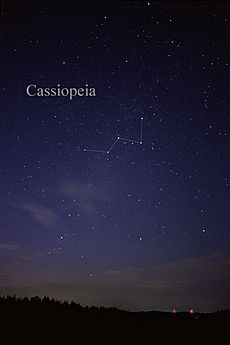 The German cartographer Johann Bayer used the Greek letters Alpha through Omega, and then A and B, to label the most prominent 26 stars in the constellation. Upsilon was later found to be two stars and labelled Upsilon1 and Upsilon2 by John Flamsteed. B Cassiopeiae was in fact the supernova known as Tycho's Supernova. Within the constellation's borders, there are 157 stars brighter than or equal to apparent magnitude 6.5.

The five brightest stars of Cassiopeia – Alpha, Beta, Gamma, Delta, and Epsilon Cassiopeiae – form the characteristic W-shaped asterism. All five are prominent naked eye stars, three are noticeably variable, and a fourth is a suspected low amplitude variable. The asterism is oriented as a W when below Polaris during northern spring and summer nights. In northern winter, and when seen from southern latitudes, it is "above" Polaris (i.e. closer to the zenith) and the W appears inverted.

Alpha Cassiopeiae, traditionally called Schedar (from the Arabic Al Sadr, "the breast"), is a multiple star. The primary is an orange-hued giant of magnitude 2.2, 228 ± 2 light-years from Earth. With a luminosity of around 771 times that of the Sun, it has swollen and cooled after exhausting its core hydrogen over its 100 to 200 million-year lifespan, spending much of it as a blue-white B-type main-sequence star. The brightest companion is a magnitude 8.9 yellow dwarf widely separated from the primary, while two other companions are closer and magnitudes 13 and 14 respectively.

Beta Cassiopeiae, or Caph (meaning "hand"), is a white-hued star of magnitude 2.3, 54.7 ± 0.3 light-years from Earth. Around 1.2 billion years old, it has used up its core hydrogen and begun expanding and cooling off the main sequence. It is around 1.9 times as massive as the Sun, and around 21.3 times as luminous. Rotating at about 92% of its critical speed, Caph completes a full rotation every 1.12 days. This is giving the star an oblate spheroid shape with an equatorial bulge that is 24% larger than the polar radius. It is a Delta Scuti variable with a small amplitude and period of 2.5 hours.

Gamma Cassiopeiae is the prototype Gamma Cassiopeiae variable star, a type of variable star that has a variable disc of material flung off by the high rotation rate of the star. Gamma Cassiopeiae has a minimum magnitude of 3.0 and a maximum magnitude of 1.6, but is generally near magnitude 2.2, with unpredictable fades and brightenings. It is a spectroscopic binary, with an orbital period of 203.59 days and a companion with a calculated mass about the same as the Sun. However, no direct evidence of this companion has been found, leading to speculation that it might be a white dwarf or other degenerate star.

Delta Cassiopeiae, also known as Ruchbah or Rukbat, meaning "knee," is an Algol-type eclipsing binary star. It varies by 0.1 magnitudes around magnitude 2.7; its period is 2 years and 1 month. It is 99.4 ± 0.4 light-years from Earth.

Epsilon Cassiopeiae has an apparent magnitude of 3.3. Located 410 ± 20 light-years from Earth, it is a hot blue-white star of spectral type B3 III with a surface temperature of 15,680 K. It is 6.5 times as massive and 4.2 times as wide as the Sun, and belongs to a class of stars known as Be stars—rapidly spinning stars that throw off a ring or shell of matter.

The December Phi Cassiopeiids are a recently discovered early December meteor shower that radiates from Cassiopeia. Phi Cassiopeiids are very slow, with an entry velocity of approximately 16.7 kilometers per second. The shower's parent body is a Jupiter family comet, though its specific identity is unknown.

In the Cosmology of Tolkien's legendarium, Cassiopeia has been equated with the elvish constellation Wilwarin, the butterfly.

In the original Battlestar Galactica television series, one of the supporting female characters was named after the constellation.

In the film Contact (1997) starring Jodie Foster and Matthew McConaughey, Foster's character Dr. Eleanor Arroway has the following line of dialogue: "You see that large W-shaped constellation there? That's Cassiopeia. And Cassiopeia A gives off a whole lot of radio signals. I listen to them a lot. It's a remnant of a supernova."

In the 1998 episode of The X-Files, "Patient X", guest starring Veronica Cartwright, Cartwright's character Cassandra Spender, an alien abductee, leaves fingerprints on a window corresponding to the constellation Cassiopeia, a reference to the character's name (she is confined to a wheelchair) as well as an implied origin for the aliens who abducted her.

In the film Serendipity (2001) starring John Cusack and Kate Beckinsale, Cusack tells Beckinsale about the constellation Cassiopeia the night they meet one another after noticing that the freckles on her forearm match the constellation's pattern exactly.

In the Film "The Edge", Anthony Hopkins Character points to Cassiopeia and mentions the two stars forming the last line in the W point to the north.

In the hip-hop musical In the Heights, the smog and light pollution of New York City are referenced by the lyric "Ain't no Cassiopeia in Washington Heights".

In Sara Bareilles' album The Blessed Unrest (2013), the 7th track is titled "Cassiopeia" and is lyrically and metaphorically about the stars. During the making of The Blessed Unrest, she was given a book about astronomy. She found herself fascinated reading about the different constellations, especially Cassiopeia, as well as the topic of supernovas, the incredibly bright bursts of light that stars give off when they explode. Inspired, she penned this song imagining Cassiopeia as a human, and falling in love with another star. "I started to think about how that might feel to personify, you know? The idea of being a star and so far away from everything around you," she told Radio.com "What if a star falls in love? The song is this idea that you give something up to come together."

In "The Fifth Wave" book series by Rick Yancey, the main character and protagonist is named Cassie for Cassiopeia, having been named after it because it was pretty, not because her parents knew the myth.

In the Japan's first super sentai series, Himitsu Sentai Gorenger, Cassiopeia is the constellation whose cosmic rays weaken the main enemy Black Cross Fuhrer and thus was incorporated into Gorenger's finisher. Each syllable of Cassiopeia was also spelled out by the first Japanese letter of each ranger's surname spelling Ka-Shi-O-Pe-A.

All content from Kiddle encyclopedia articles (including the article images and facts) can be freely used under Attribution-ShareAlike license, unless stated otherwise. Cite this article:
Cassiopeia (constellation) Facts for Kids. Kiddle Encyclopedia.