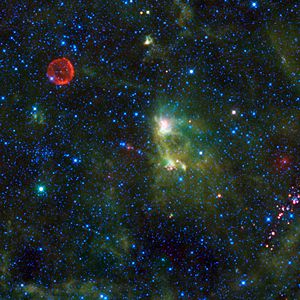 The red circle visible in the upper left part of this WISE image is the remnant of SN 1572.

SN 1572 was a supernova seen in 1572 that could be seen in the constellation Cassiopeia. It is sometimes called "Tycho's Nova" or "Tycho's Star" since Tycho Brahe studied it. The supernova became visible in November 1572 and stayed visible until 1574. SN 1572 is one of only about ten supernovas that could be seen without telescopes.

All content from Kiddle encyclopedia articles (including the article images and facts) can be freely used under Attribution-ShareAlike license, unless stated otherwise. Cite this article:
SN 1572 Facts for Kids. Kiddle Encyclopedia.