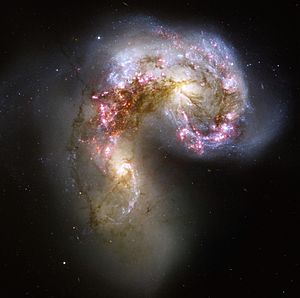 The Antennae galaxies show starbursts during the collision of NGC 4038/NGC 4039. Credit: NASA/ESA 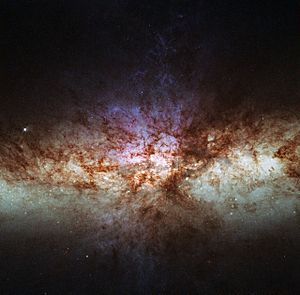 Messier 82 is the prototype starburst galaxy. It is about 12 million light-years away in the constellation Ursa Major

So, the starburst nature of a galaxy is a short phase in a galaxy's evolution, just tens of millions of years. Most starburst galaxies are in the midst of a galaxy merger or at least close encounter with another galaxy.

Studying nearby starburst galaxies can help us explore the history of galaxy formation and evolution. Many very distant galaxies seen, for example, in the Hubble Deep Field are known to be starbursts, but they are too far away to be studied in any detail. Looking at nearby examples give us an idea of what was happening in the early universe. The light we see from distant galaxies left them when the universe was much younger (see redshift).

Starburst galaxies seem to be quite rare in our local universe, and are more common further away. This suggests there were more of them billions of years ago. All galaxies were closer together then, and therefore more likely to be influenced by each other's gravity. More frequent encounters produced more starbursts as galactic forms evolved with the expanding universe.

All content from Kiddle encyclopedia articles (including the article images and facts) can be freely used under Attribution-ShareAlike license, unless stated otherwise. Cite this article:
Starburst galaxy Facts for Kids. Kiddle Encyclopedia.