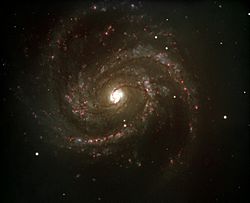 Messier 100, by the European Southern Observatory 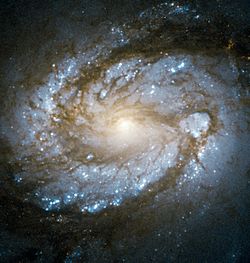 Core of Messier 100 taken with the high resolution channel of Hubble's Advanced Camera for Surveys.

Messier 100 (also known as NGC 4321) is an example of a so-called 'grand design' spiral galaxy. It is visible in the southern part of constellation Coma Berenices. Messier 100 is one of the brightest and largest galaxies in the Virgo cluster, about 55 million light-years away, with a diameter of 160,000 light years. It was discovered by Pierre Méchain in 1781. Later it was entered in Messier’s catalogue of nebulae and star clusters after Charles Messier made observations of his own a month later. The galaxy was one of the first spirals discovered, and was listed as one of 14 spiral nebulae by the Earl of Rosse in 1850.

Messier 100 is considered a starburst galaxy with a radius of 1 kilo-parsec, where star formation has been taking place for least 500 million years in separate bursts. Star formation is concentrated in a ring – actually two tightly wound spiral arms attached to a small nuclear bar.

As usual on spiral galaxies of the Virgo Cluster, in the rest of the disk both star formation and neutral hydrogen are reduced in the galaxy's disk, something caused by interactions in the Virgo cluster.

All content from Kiddle encyclopedia articles (including the article images and facts) can be freely used under Attribution-ShareAlike license, unless stated otherwise. Cite this article:
Messier 100 Facts for Kids. Kiddle Encyclopedia.