The Antennae galaxies (NGC 4038/NGC 4039) are two colliding galaxies. They are in the constellation Corvus. The process takes hundreds of millions of years, maybe even a billion years.

The collision, with its clouds of gas, dust and magnetic fields, causes extremely rapid star formation. This is their starburst phase, and might last a few hundred million years. They were discovered by William Herschel in 1785.

They are in the NGC 4038 group with five other galaxies. Before The Collision, NGC 4038 was a barred spiral galaxy and NGC 4039 was a spiral galaxy. These two galaxies are known as the Antennae galaxies because they have two long tails of stars, gas and dust ejected from the galaxies as a result of tidal force in the collision that look like an insect’s antennae. The nuclei of the two galaxies are joining to become one giant galaxy, sometime in the future to form an Elliptical galaxy. 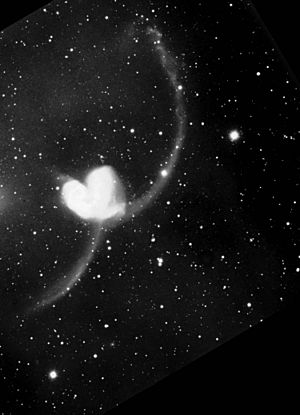 All content from Kiddle encyclopedia articles (including the article images and facts) can be freely used under Attribution-ShareAlike license, unless stated otherwise. Cite this article:
Antennae galaxies Facts for Kids. Kiddle Encyclopedia.