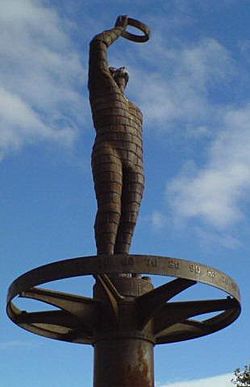 Statue of an astronomer and the concept of the cosmic distance ladder by the parallax method, made from the azimuth ring and other parts of the Yale-Columbia Refractor (telescope) (c 1925) wrecked by the 2003 Canberra bushfires which burned out the Mount Stromlo Observatory; at Questacon, Canberra, Australian Capital Territory

The cosmic distance ladder (also known as the Extragalactic Distance Scale) is the succession of methods by which astronomers determine the distances to celestial objects. A real direct distance measurement to an astronomical object is only possible for those objects that are "close enough" (within about a thousand parsecs) to earth. The techniques for determining distances to more distant objects are all based on various measured correlations between methods that work at close distances with methods that work at larger distances. Several methods rely on a standard candle, which is an astronomical object that has a known luminosity.

At the base of the ladder are fundamental distance measurements, in which distances are determined directly, with no physical assumptions about the nature of the object in question. The precise measurement of stellar positions is part of the discipline of astrometry.

Direct distance measurements are based upon precise determination of the distance between the Earth and the Sun, which is called the Astronomical Unit (AU). Historically, observations of transits of Venus were crucial in determining the AU; in the first half of the 20th Century, observations of asteroids were also important.

Presently the AU is determined with high precision using radar measurements of Venus and other nearby planets and asteroids, and by tracking interplanetary spacecraft in their orbits around the Sun through the Solar System. Kepler's Laws provide precise ratios of the sizes of the orbits of objects revolving around the Sun, but not a real measure of the orbits themselves. Radar provides a value in kilometers for the difference in two orbits' sizes.

All content from Kiddle encyclopedia articles (including the article images and facts) can be freely used under Attribution-ShareAlike license, unless stated otherwise. Cite this article:
Cosmic distance ladder Facts for Kids. Kiddle Encyclopedia.