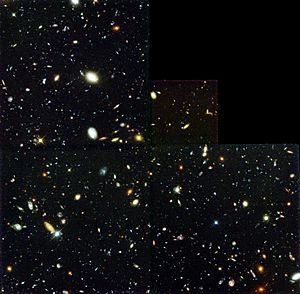 A high resolution version of The Hubble Deep Field

The Hubble Deep Field, sometimes called the HDF, is an image of a small part of the night sky. The image was taken in the direction of the constellation Ursa Major by the Hubble Space Telescope in 1995.

It is important because it shows some of the earliest (farthest away) galaxies ever seen, over 3000 in total.

The area of the sky the HDF was taken in makes up less than 1/10th the width of a full Moon, yet it contains over 3,000 galaxies.

Because of the time it takes for light from these galaxies to reach Earth, many in the picture look exactly as they did over 10 billion (10,000,000,000) years ago. Because of this it allows scientists to look at what the Universe was like at that time, and how it changed to become what it is now. Add to this the cosmological principle, which suggests that on large scales the Universe is roughly the same no matter what direction you look, and the HDF becomes a very important tool for astronomers studying how the Universe has changed.

For these reasons the HDF is sometimes called 'the most important image ever taken'.

All content from Kiddle encyclopedia articles (including the article images and facts) can be freely used under Attribution-ShareAlike license, unless stated otherwise. Cite this article:
Hubble Deep Field Facts for Kids. Kiddle Encyclopedia.