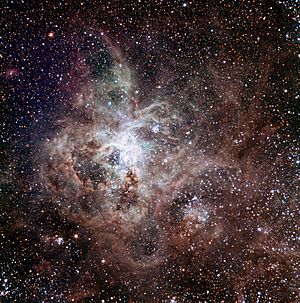 The Tarantula nebula (also known as 30 Doradus) is an H II region in the Large Magellanic Cloud (LMC). It was originally thought to be a star, but in 1751 Lacaille recognized it was a nebula.

The Tarantula nebula has an apparent magnitude of 8. Considering its distance of 49 kpc (160,000 light-years), this is an extremely luminous object. Its luminosity is so great that if it were as close to Earth as the Orion Nebula, the Tarantula nebula would cast shadows.

30 Doradus has at its centre the star cluster NGC 2070 which includes the group of stars known as R136. This group puts out most of the energy that makes the nebula visible. The estimated mass of the cluster is 450,000 solar masses. It may become a globular cluster in the future.

In addition to NGC 2070, the Tarantula nebula has other star clusters, including the much older Hodge 301. The most massive stars of Hodge 301 have already exploded in supernovae. The closest supernova observed since the invention of the telescope, Supernova 1987A, occurred in the outskirts of the Tarantula Nebula. The remnants of many other supernovae are difficult to detect in the complex nebulosity.

All content from Kiddle encyclopedia articles (including the article images and facts) can be freely used under Attribution-ShareAlike license, unless stated otherwise. Cite this article:
Tarantula nebula Facts for Kids. Kiddle Encyclopedia.