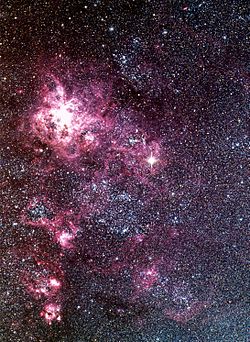 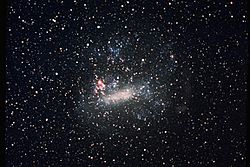 SN 1987A within the Large Magellanic Cloud 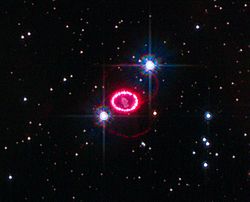 SN 1987A was a supernova in a small galaxy that is orbiting our Milky Way galaxy. The supernova was 168,000 light years away, and so happened 168,000 years ago. But it was 1987 when it was first seen. It was close enough that scientists found neutrinos before the light got to Earth.

SN 1987A is the only supernova that has been that close in modern times, It was the brightest object seen from Earth in over 400 years. There have been many others that were closer but they were before scientists had the tools to help them understand what was happening.

"Scientists believe they've finally tracked down the dead remnant from Supernova 1987A – one of their favourite star explosions. Astronomers knew the object must exist but had always struggled to identify its location because of a shroud of obscuring dust".

All content from Kiddle encyclopedia articles (including the article images and facts) can be freely used under Attribution-ShareAlike license, unless stated otherwise. Cite this article:
SN 1987A Facts for Kids. Kiddle Encyclopedia.