Monoceros (Greek: Μονόκερως) is a constellation on the celestial equator. Its name is Greek for unicorn. It was described by 17th-century Dutch cartographer Petrus Plancius. Orion is to the west of Monceros. Gemini is to the north. Canis Major is to the south. Hydra is to the east. Other constellations next to Monoceros are Canis Minor, Lepus and Puppis. 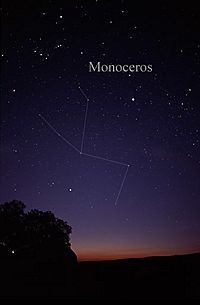 The constellation Monoceros as it can be seen by the naked eye.

Monoceros is hard to see with the naked eye. Its brightest star, Alpha Monocerotis, has a visual magnitude of 3.93. It is brighter than Gamma Monocerotis at 3.98.

Monoceros does have some interesting features to look at with a small telescope. Beta Monocerotis is a triple star system. The three stars form a triangle which looks to be in one spot. William Herschel commented that it is "one of the most beautiful sights in the heavens".

Monoceros also has Plaskett's Star. It is a big binary system. Its whole mass is said to be that of almost 100 Suns put together.

All content from Kiddle encyclopedia articles (including the article images and facts) can be freely used under Attribution-ShareAlike license, unless stated otherwise. Cite this article:
Monoceros Facts for Kids. Kiddle Encyclopedia.