Lepus is a constellation south of the celestial equator. Its name is Latin for hare. The hare is not from any figure in Greek mythology. Lepus was one of the 48 constellations listed by the 2nd century astronomer Ptolemy. It is one of the 88 modern constellations. It is below the constellation Orion (the hunter). It is known as a hare being chased by Orion.

This constellation should not be mixed up with Lupus, the wolf. 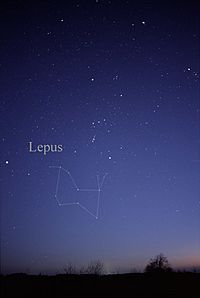 The constellation Lepus as it can be seen by the naked eye. 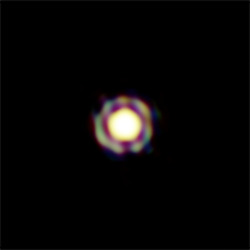 All content from Kiddle encyclopedia articles (including the article images and facts) can be freely used under Attribution-ShareAlike license, unless stated otherwise. Cite this article:
Lepus (constellation) Facts for Kids. Kiddle Encyclopedia.