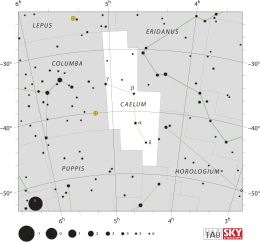 Caelum is a constellation in the southern sky. It is hard to see because it is not very bright. It means "the chisel" in Latin. Before, people called Caelum Scalptorium, which means "the engraver's chisel". It was created and named by the French astronomer named Nicolas Louis de Lacaille in the 1750s. The brighest star in Caelum has a magnitude of 4.45. This means that all of the stars in Caelum are too dark for people who live in cities to see.

All content from Kiddle encyclopedia articles (including the article images and facts) can be freely used under Attribution-ShareAlike license, unless stated otherwise. Cite this article:
Caelum Facts for Kids. Kiddle Encyclopedia.