Columba is a small, faint constellation created in the late sixteenth century. Its name is Latin for dove. It is located just south of Canis Major and Lepus. 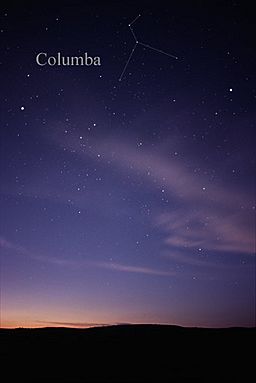 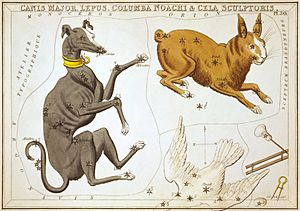 Columba was created by Dutch astronomer Petrus Plancius in 1592 in order to differentiate the 'unformed stars' of the large constellation Canis Major.

Plancius originally named the constellation Columba Noachi ("Noah's Dove"), referring to the dove that gave Noah the information that the Great Flood was receding. This name is found on early 17th-century celestial globes and star atlases. Columba may also represent the dove released by Jason and the Argonauts at the Black Sea's mouth; it helped them navigate the dangerous Symplegades.

All content from Kiddle encyclopedia articles (including the article images and facts) can be freely used under Attribution-ShareAlike license, unless stated otherwise. Cite this article:
Columba (constellation) Facts for Kids. Kiddle Encyclopedia.