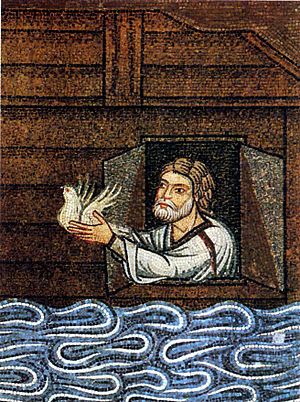 Noah (meaning rest or comfort) is a man in the Abrahamic religions. He was the son of Lamech, and the father of sons, Shem, Ham, and Japheth. Noah and his ark is in the Book of Genesis, which also describes Noah as the 'first man to plant a vineyard' (chapter 9)

As described in the Book of Genesis, Noah and his family kept believing in God in a time when most people were not. Knowing this was true, God told Noah he was going to flood the world, so he could drown out evil. He told Noah to build a boat called an ark. Noah was to put himself, his family, and two (a male and a female) of every kind of animal on it. People laughed at Noah at first, but they were killed by the flood. Noah and family stayed on the ark until they reached land. To find land Noah sent out a dove, which returned with an olive branch. After the flood, God made a rainbow as a promise to say that he would never destroy the Earth by flood again. When they were able to walk on dry land, the animals were released and they were able to repopulate the earth.

All content from Kiddle encyclopedia articles (including the article images and facts) can be freely used under Attribution-ShareAlike license, unless stated otherwise. Cite this article:
Noah Facts for Kids. Kiddle Encyclopedia.